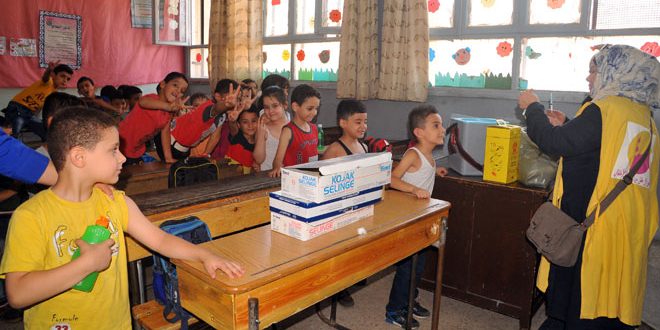 The campaign will continue until September 28 and it targets all children aged 5-12 in addition to children between 7 months and five years old who missed the previous similar campaign carried out by the ministry last May.

The campaign is launched in cooperation with the Ministry of Education, the World Health Organization (WHO) and the United Nations Children’s Fund (UNICEF) through 1073 health centers, 1280 mobile teams and more than 8,000 health workers.

In turn, Director of Damascus Health Department Mohammad Ramez Orfali pointed out that the Directorate has taken all the required measures to ensure the success of the campaign in the province, adding that the campaign targets 280,000 children aged 5-12, in addition to 70,000 children who missed the previous campaign.

He pointed out that the pre-campaign phase includes the distribution of awareness brochures about the campaign’s objectives and the importance of giving the children the vaccines to ensure their health and safety, in parallel with coordination with the Syrian Arab Red Crescent (SARC) to enter some hard-to-access areas to give children vaccines included in the program of the routine vaccination and measles vaccine.

Last week, the Health Ministry announced that it took all necessary measures to complete the campaign and enable it to reach 3.6 million children in various provinces.

This is the second measles campaign this year, where the previous vaccination campaign targeted 2.6 million children from seven months to five years old through health centers and mobile teams.