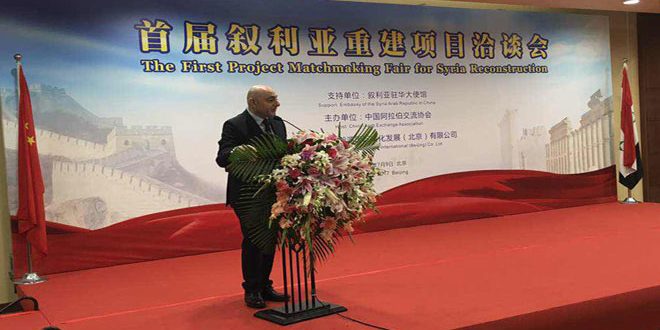 Beijing, SANA – The China-Arab Exchange Association, in cooperation with the Syrian Embassy in Beijing, held on Sunday a Syrian Day with the participation of 1,000 representatives of Chinese companies specializing in investment and reconstruction

This initiative seeks to promote the upcoming Damascus International Fair, as well as the the Reconstruction Expo.

For his part, Deputy Chairman of China-Arab Exchange Association Qin Yong, who had visited Syria last June, expressed optimism in Syria’s ability to rise again, encouraging the Chinese companies to invest in it.

The event included a presentation showcasing significant investment sites in Syria and the recent decisions issued by the Syrian government connected to facilitating investment opportunities.

The 59th Damascus International Fair is scheduled to be held on August 17-26 at the Damascus Fairgrounds, with the participation of
about 30 Arab and foreign countries.