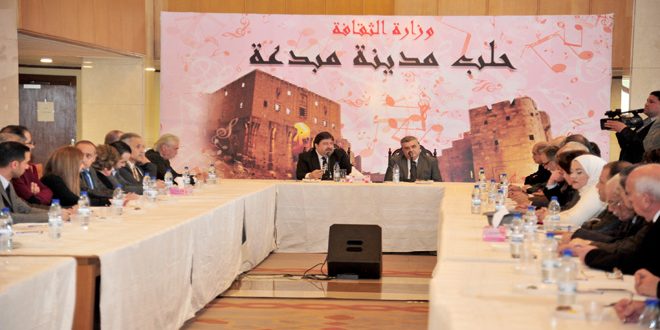 Damascus, SANA – The initiative to nominate the Syrian city of Aleppo for the title of UNESCO “City of Music” was launched during a special ceremony held Wednesday at Dar al-Assad for Culture and Arts.

Based on the importance of documenting the rich Syrian civilization and heritage, particularly that of Aleppo city, Ministries of Culture, Tourism, Education, Information and Local Administration launched an initiative to include the city in the list of UNESCO Creative Cities Network in cooperation with civil society and a number of musicians, researchers and artists.

Minister of Culture Mohammed al-Ahmad found in the nomination of Aleppo a national and cultural victory taking into account the devastated destruction caused by the armed terrorist groups, adding that it sends a message of glory and steadfastness to those inside Syria and abroad. He indicated to the Ministry’s plans to organize theatrical shows, musical concerts, book fairs and art exhibitions in Aleppo with the aim of reactivating cultural movement in the city, highlighting efforts exerted by it to rehabilitate what has been destroyed.

Assistant Culture Minister Rami Martini said that Aleppo has a significant contribution to the development of the Arab music, especially Andalusian Muwashahat and its musicians have played key role in further improving it.

Deputy Speaker of People’s Assembly Najdat Ismail Anzour underlined the importance of such initiative under current circumstances since it supports the steadfastness of the Syrian people and provides positive image of the Syrian civilization.

He stressed the need to document Syria’s heritage and preserve the Syrian musical identity.

The UNESCO Creative Cities Network now includes more than 70 cities in seven creative fields: crafts and folk arts, design, film, gastronomy, literature, media arts and music. It aims to strengthen cooperation with and among cities that have recognized creativity as a strategic factor of sustainable development as regards economic,  social, cultural and environmental aspects.

Initiative to nominate Aleppo for the title of UNESCO "City of Music" launched 2017-03-22
m.eyon
Share
Previous Two persons injured by terrorists’ explosive rounds in Damascus
Next Updated-Army foils attempts by al-Nusra to break siege imposed on terrorists north of Jobar