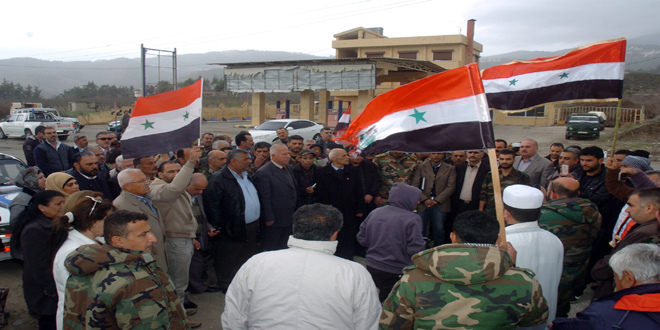 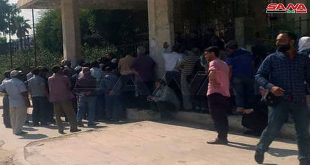 Lattakia, SANA – The Democratic Vanguard Party (Al Talia’a Democratic Party) held a protest to denounce the policies of the Turkish regime under Recep Tayyip Erdogan in support of terrorism, condemning condemn the move of building a concrete wall on the Syrian-Turkish border.

The protest was held in Kassab area in the northern countryside of Lattakia amid wide participation.

Speaking during the protest, the Party’s Secretary General Nawfal Nawfal said Erdogan’s claims that the wall is aimed at preventing the infiltration of terrorists are baseless as his regime continues to provide military, financial and logistic support to the terrorist organizations. 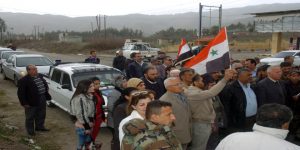 He noted that combating terrorism should be through implementing the UN Security Council resolutions and freezing funding sources of the terrorists, in addition to stopping buying oil, gas and antiques looted by the terrorist organizations in Syria, adding that the main aim of building the wall is to keep terrorism and terrorists in Syria and prevent them from returning to the Turkish territory.

He also reaffirmed his party’s support for the Syrian Arab Army in its war against terrorism and standing behind the leadership of President Bashar al-Assad who is the actual guarantor of the unity and independence of Syria.

For their part, the participants in the protest stressed the need of implementing the UNSC resolutions related to combating terrorism and compelling Erdogan’s regime to stop arming and funding the terrorist organizations who commit crimes against the Syrians.