Damascus, SANA – Deputy Prime Minister, Foreign and Expatriates Minister Walid al-Moallem on Tuesday discussed with President of the International Committee of the Red Cross (ICRC) Peter Maurer and the accompanying delegation the distinguished cooperation relations between the Syrian government and the ICRC.

The two sides discussed the positive role of the continuous coordination between them, as well as the cooperation with the Syrian Arab Red Crescent (SARC), to ensure that the services provided by the ICRC reach all the groups affected by the terrorist war and the sanctions imposed on Syria.

The two sides stressed the need to maintain constant coordination and communication to overcome any challenges and obstacles that could arise. 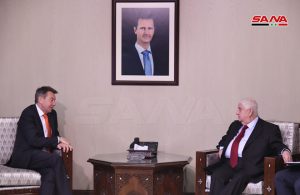 Al-Moallem praised the trust that had been built between the two sides during the past few years, affirming Syria’s commitment to providing all forms of support and facilitation to the ICRC, stressing the importance for the Committee abiding by the principles of humanitarian work and preventing any side from influencing or politicizing its work and projects, and from damaging the positive relation it has with Syria.

He also said the ICRC activities must address the new challenges that have emerged in areas liberated from terrorism by the Syrian Arab Army recently, calling on the organization to expand its efforts in those areas, mainly the liberated parts of Aleppo, Idleb, and Hama provinces.

Al-Moallem stressed the importance of providing aid and support immediately to help ensure the return of normal life to those areas and facilitate the return of their people to their homes.

For his part, Maurer said the ICRC is proud of its distinguished relationship with Syria, thanking the Syrian government for its considerable and continuous support and facilitations.

He affirmed his constant commitment to maintaining the trust that the Syrian government has for the ICRC.

Maurer also reviewed the ICRC’s current work and projects in Syria, praising the role played by the SARC in humanitarian efforts, and affirming that the Committee is keen on expanding its works and activities in the country. 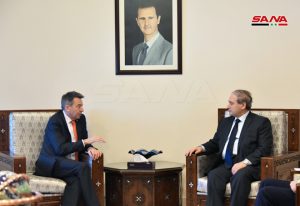 During the meeting, Mikdad expressed the Syrian government’s appreciation for the ICRC’s humanitarian efforts in Syria, affirming the government’s commitment to facilitating the Committee’s work across the country.

He also emphasized the need for the ICRC and other international organizations to give special attention to the areas liberated by the army recently.