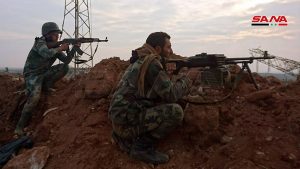 SANA’s reporter in Aleppo said that army units carried out military operations in the western countryside of Aleppo, during which the front lines of terrorists have been broken following intensive artillery and rocket strikes against their gatherings in al-Rashideen5, Marata, Mistawd’at al-Waqoud, Rahbet al-Taslih, and Mistawd’at Khan Touman.

The operations ended up with liberating the above-mentioned villages and areas, , killing and injuring many of the terrorists while the remaining others fled deep in Aleppo western countryside amid a state of collapse and confusion among their ranks, the reporter indicated.

A field commander said that many sites where the terrorists positioned in them towards khan Touman town west Aleppo were liberated, including al-Dahr al-Gharbi, Rahbet al-Taslih, Talet al-Mahrouqat, Mistawd’at al- Mahrouqat, and Marata.

The field commander affirmed that the military operations are still ongoing until terrorism is fully eliminated.