Damascus, SANA_ Activities of meeting of the General Secretariat of Conference of Arab Parties under the title “From al-Quds to the Golan…The Land is ours” kicked off on Tuesday at the Damascus based al-Sham Hotel. 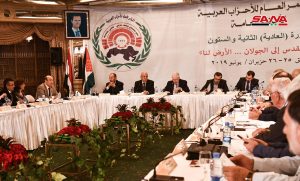 President of the conference, Safwan Qudsi  underlined the need for constructive dialogue among representatives of Arab participant parties in the conference and presenting visions and opinions to take a stance towards different Arab issues.

For his part, General Secretary of the conference Sasem Saleh said that Syria has formed the first defense line in defending the Arab nation interests and issues, and it has defeated the Takfiri terrorism.

He rejected all forms of blockade on the resistance which was found to liberate all the Arab usurped lands in South Lebanon, Syrian Golan and Palestine. 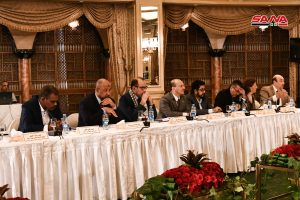 The participants called for preparing a popular program to break the siege imposed on Syria and the resistant countries which confront the US-Zionist hostile polices.

They affirmed that all Arab people reject the so-called Economic workshop to which the US administration called to be convened in the Bahraini capital of Manama today to announce the conspiracy of “Deal of the Century,” which aim to liquidate the Palestinian cause.

Meeting of general secretariat of Arab parties conference kicks off 2019-06-25
ghossoun
Share
Previous Syrian lawyers stage sit-ins to condemn economic workshop of Bahrain
Next Luzar: Some NATO member states have been main reason behind wars in Syria, Libya and Yemen