The two sides discussed the historical cooperation and friendship relations between the two countries and means for enhancing them in all fields, including economic and commercial cooperation and India’s participation in the reconstruction process, as well as discussing preparations for the meetings of the Syrian-Indian Joint Committee for Cooperation which will be held in Damascus soon. 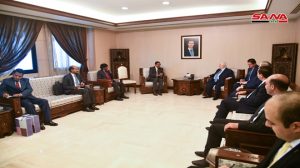 The two sides also discussed developments in Syria and the war on terrorism, expressing matching viewpoints regarding the various issues that were discussed.

Minister al-Moallem underlined the strength of the relations between the two countries, expressing Syria’s appreciation for India’s support for Syria at international circles and its support for the Syrian people in their war on terrorism.

Al-Moallem stressed the importance of enhancing Syrian-Indian cooperation in all fields to establish long-term strategic relations and encourage India to participate in the reconstruction process, which serves the interests of the two countries and their peoples.

For his part, Tirumurti said the aim of his visit to Syria is to hold talks with Syrian sides in preparation for the upcoming Joint Committee meetings, affirming India’s commitment to supporting Syria and strengthening cooperation with it in all fields.

He also said India wants to participate in the reconstruction process, which would serve the interests of both countries and contribute to restoring stability and peace to Syria.

Tirumurti admired the steadfastness of the Syrian leadership and people in the face of terrorism, affirming India’s commitment to Syria’s sovereignty, unity, and territorial integrity. 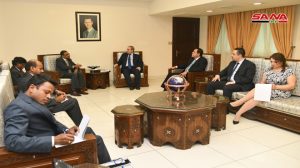 In the same context, Deputy Foreign and Expatriates Minister Fayssal Mikdad discussed with Tirumurti and the accompanying delegations means to enhance bilateral relations and topics related to the preparations for the Joint Committee meetings.

Mikdad underlined the strength of the relations between Syria and India and the values they share, stressing the need to build upon these basis to build a better present and future.

He said that India is very important to Syria from a strategic standpoint in terms of President Bashar al-Assad’s directive to look to the east, adding that Syria respects India’s achievements in economy and technology and its growing role on the international arena and as part of the BRICS group.

The Deputy Ministry said India can play a vital role in the reconstruction process with its promising capabilities, stressing the need to cooperate to combat terrorism which threatens both countries.

In turn, Tirumurti said his visit affirms India’s support for Syria and its steadfastness and achievements in fighting terrorism, and that it expresses India’s desire to expand the prospects of bilateral relations in the coming stage.