Damascus/ Damascus Countryside, SANA- Some 18 civilians were martyred or injured on Tuesday due to terrorist attacks with shells on Damascus and its Countryside by Jabhat al-Nusra and the groups affiliated to it which are positioned in some areas in Ghouta.

A source at Damascus Police Command told SANA that two shells fired by terrorist organizations fell on al-Joura area in Bab Touma neighborhood, injuring two civilians, a child among them, and causing material damage to properties. 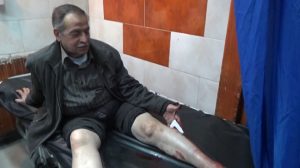 Eish al-Warwar neighborhood with a shell which caused material damage to the place, the source added.

Three civilians were martyred, eight others were injured and material damage was caused as a result of a terrorist attack with two shells on al-Siouf Square and Karm al-Smadi area in Jaramana city, according to a source at Damascus Countryside Police Command.

Earlier, the source said that two rocket shells landed in the surrounding of al-Raes Square and the entrance of Jaramana city, leaving 5 civilians injured including a 15-year-old girl who is in a critical condition, in addition to causing material damage to the properties.

attack Damascus injured shelling two 2018-03-06
ruaa-jazaeri
Share
Previous SANA’s delegate to Ghouta: Army units eliminate last gatherings of Jabhat al-Nusra terrorist organization and the groups affiliated to it in the town of al-Muhamadyia and hunt down their remnants in the surrounding farms
Next Army regains control over al-Muhamadyia town and al-Ashari farms, continues to advance in Eastern Ghouta