Al-Jaafari: Astana meeting succeed in consolidating cessation of hostilities for a specific period of time 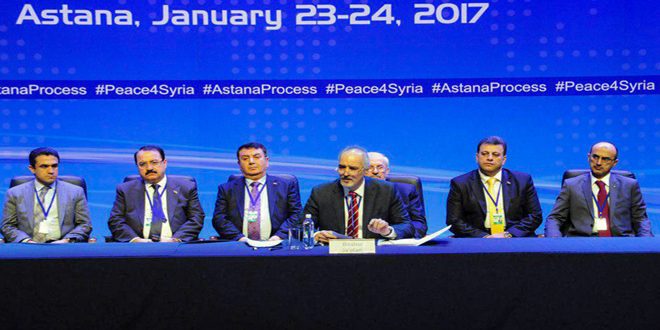 Astana, SANA – Head of the Syrian Arab Republic delegation to Astana meeting, Bashar al-Jaafari said on Tuesday that the meeting succeeded in achieving the goal of consolidating the cessation of hostilities for a specific period of time, which would pave the way for dialogue among the Syrians.

“We worked over the last two days painstakingly around the clock to make this meeting a success, and we did everything we could to remove the obstructions. Therefore, we believe that Astana meeting succeeded in achieving the goal of consolidating the cessation of hostilities for a specific period of time, which would pave the way for dialogue among the Syrians,” al-Jaafari told a press conference in the capital of Kazakhstan, that hosted a two-day meeting on the crisis in Syria.

He expressed thanks to the Kazakh leadership “for all the facilitations it provided to help our meetings and activities succeed.”

Al-Jaafari also extended thanks to the “Russian and Iranian friends” for their great efforts that have effectively contributed to make a success of the cessation of hostilities in order to reach towards stopping the Syrian bloodshed and working together with these groups to eliminate terrorism and reconstruct Syria.

He called on the regional countries that are supporting terrorism to reconsider their policies and correct their mistakes for serving the best interest of their people, whose money was wasted and had terrorism backfired on them, and for the interest of the people of the region. Al-Jaafari referred to a paragraph stated in the final statement of Astana meeting that provides that the states who signed the statement will jointly fight terrorism, including ISIS and Jabhat al-Nusra.

“We assume that this should be applied practically by Turkey and the other parties, as this statement is binding on its signatories, and Turkey is one of the signatories,” he said.

He cited Turkey, Qatar and Saudi Arabia as some of the countries involved directly or indirectly in the bloodshed in Syria, calling on these countries to change their bloody policies towards the Syrian people and towards their own people.

“Stop playing with fire and betting on losing cards. Everybody has lost, including the countries supporting terrorism. Terrorism has arrived in their own backyards, which is something that we warned of from the very beginning,” said al-Jaafari.

He refused to comment on statements made by the delegation of the terrorist groups, saying “We don’t make comments on information. We are a responsible state that assesses matters officially issued by this or that capital, or this or that party.”

He added that the specific objective of Astana meeting is “not to bargain”, but to strengthen the cessation of hostilities and look with a collective view of those who participated in this meeting into the mechanism to put this objective into effect.

“It was distressful that we had to sit in the same room with other Syrians that are linked to foreign agendas and are working for foreign authorities, and some of them are committed to terrorist groups,” said al-Jaafari, noting that this also happened before in Moscow and Geneva. “However, no matter the cost, we would do that to save our state and our people. We do that according to a certain framework and a certain agenda, and also in light of the expected meetings, and we don’t do it without planning,” he added.

“Whatever the cost would be, we would do anything in order to stop the terrorist war on the Syrian people,” he reiterated.

As for the mechanism to observe the cessation of hostilities, al-Jaafari said there will be a trilateral mechanism, as stated in the final Joint Statement, that will meet later to set up formulas and methods of work, noting that all of that will be done in consultation with the Syrian government.

Regarding the statements of the terrorist groups’ delegation on Iran’s role in the meeting, al-Jaafari stressed that when dealing with political issues, one must not rely on emotions, and that the issue isn’t about who’s happy and who’s angry but about the bottom line which is the closing statement that was reached.

He also noted that Iran is one of the three guarantors that secured reaching the agreement signed on December 29th which was accepted by members of the terrorist groups’ delegation.

On whether the Astana meeting paves the way towards Geneva talks, al-Jaafari said that the two are separate things with different goals, as the former aims at bolstering the ceasefire in Syria while the latter is something else completely.

Regarding the coordination mechanisms between the Syrian Arab Army and the armed groups that attended the meeting and participated in agreements, he said that Turkey is the guarantor of the armed groups therefore this issue should be directed to Turkey, adding that the duration of the cessation shouldn’t exceed a year during which military experts will decide upon technical details.

In response to a question on the “political prices” of the agreement, al-Jaafari said that there is no such thing other than the success of the meeting, and this success is satisfactory because anything that could help stop the war on the Syrian people is welcome.

On ending the classification of the groups that participated in the meeting as terrorist organizations, al-Jaafari said that these armed terrorist groups decided to follow a course that ends their terrorist practices and become part of the cessation of combat activities, meaning that by taking part in this meeting, they decided to reject violence and terrorism, adding that ISIS and al-Nusra are classified as terrorist entities by the Security Council.

On areas covered by the cessation of combat activities and whether Barada valley is part of them, he pointed out that the valley area consists of 8 or 9 villages that were liberated and the only one left in Ein al-Figeh town, therefore the issue isn’t about the whole valley but only that one town where the main spring providing drinking water to 7 million people Damascus is located, and Jabhat al-Nusra is using their position in that town to pressure people and the government via water, therefore military operations will continue there.

He went on to say that regarding other areas, this issue will be decided by military experts in their next meetings which should result in detailed maps and exchanging information to identify the exact locations of ISIS, al-Nusra, and groups affiliated to them.

Regarding the omission of the reference to Syria’s secularism in the statement, al-Jaafari said that this was upon the request of Turkey and the armed groups, which is odd since the Turkish government claims that Turkey is secular, but when it comes to Syria, it stands against secularism.

“For our part, we insisted on the issue of secularism being one of the features of the coming Syrian state that Syrians will agree upon, and our Iranian and Russian friends agreed to that; only the Turkish delegation and the armed groups’ delegation rejected that,” he said.

On announcing so-called federalism in some areas, al-Jaafari said that such a thing would be decided by all Syrians, and is not decided unilaterally by a single component of the Syrians, adding that such ideas, even one as crazy as federalism, must be put to democratic vote, but it’s completely unacceptable for a group of people to decide to create a statelet and call it federalism.

Kazakhstan welcomes the outcomes of the meetings

Kazakh Ministry of Foreign Affairs welcomed the outcomes of Astana meeting on crisis in Syria, according to Sputnik.

The Ministry said in a statement that the outcomes of Astana meeting will give a positive momentum for the political settlement to the crisis in Syria in the framework of Geneva process and UN Security Council Resolution 2254. 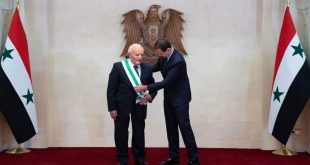