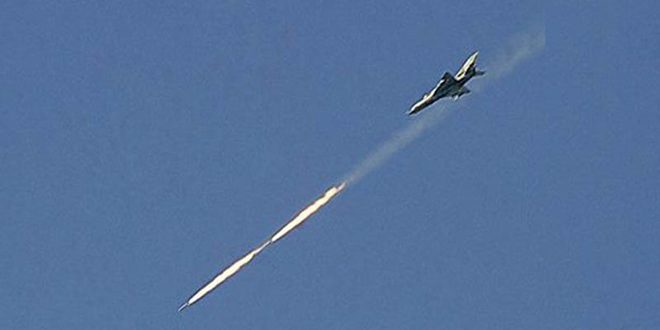 Provinces, SANA – The army’s air force carried out concentrated raids on positions and movement axes of ISIS terrorists’ vehicles during the past 24 hours.

SANA reporter in Deir Ezzor said Tuesday that the air force destroyed ISIS terrorists’ positions and killed many of them in al-Maqaber area, al-Ummal neighborhood, al-Hattla village, the surrounding of battalion 137, al-Ma’amel area and the villages of Jdeidet al-Ukeidat and Khesham.

The reporter pointed out that the air force destroyed a convoy consisting of 7 vehicles for the terrorists on Palmyra-al-Shoula road in the western countryside of the Province, killing or injuring many of the terrorists.

On the other hand, the reporter said that the terrorists targeted residential neighborhoods in Deir Ezzor city with tens of mortar shells, injuring six people and causing huge material damage to houses.

The army units, backed by the air force, also carried out strikes against gatherings and movement axes of ISIS terrorists in several villages and areas at the Badiya area between the countryside of Damascus and Homs.

The source pointed out that the strikes left tens of terrorists killed, in addition to destroying several tanks, armored vehicles and armored bases.

Meanwhile, a unit of the army targeted gatherings of ISIS terrorists south-east of the Fourth Station and Ber al-Fawa’ara in Tadmur countryside, destroying a pick-up equipped with a heavy machine gun and killing all terrorists onboard. 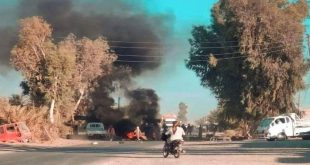 Deir Ezzor, SANA- Protests against practices and crimes of the US-backed Qasad militia “SDF” on …