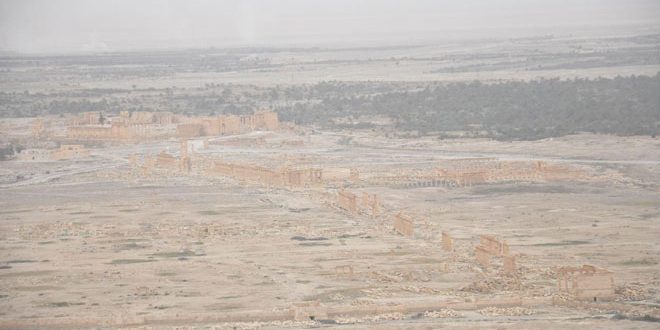 SANA’s correspondent in Homs said that Army and Armed Forces units defended the city valiantly as the terrorists attacked in large numbers exceeding 4,000 from various directions.

The correspondent quoted local sources as saying that ISIS transported large numbers of terrorists and vehicles to Palmyra from Raqqa and Deir Ezzor, and that they sustained heavy losses during the clashes in which they used many vehicles including ones rigged with large amounts of explosives.

Earlier, a military source said that Syrian Army and Armed Forces units clashed with ISIS terrorist groups that attacked military posts in the surroundings of Palmyra, and that the terrorists attacked in large numbers and from different directions, describing the clashes as “fierce.”

SANA’s correspondent had said that the Syrian Air Force carried out several sorties around Palmyra city, inflicting heavy losses upon ISIS members, and that army units repelled an ISIS attack in the surroundings of Palmyra, noting that the clashes are still ongoing at the site.

Other clashes broke out with ISIS terrorists who launched an assault from different directions towards the silos area, 10 km east of Palmyra, the reporter said.

Other ISIS attacks were launched against the Industrial City and Tallet al-Ameriyeh (hill) in the countryside of Palmyra as the terrorists tried to control the hill.

Earlier today, the army units confronted an ISIS attack in the surroundings of al-Tar Mountain and al-Ameriyeh town to the northeast of Palmyra, leaving tens of terrorists dead and destroying a tank and four vehicles equipped with machine guns.