The army establishes full control over new areas in Quneitra 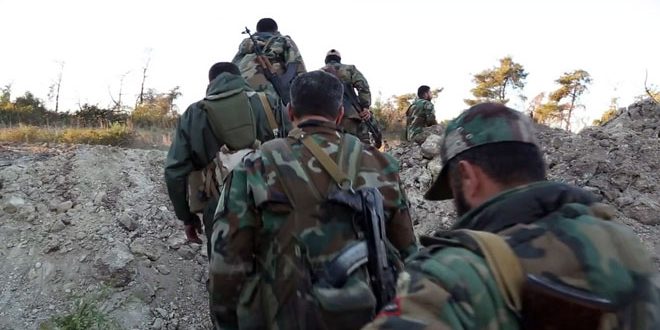 Provinces, SANA- The army continued clearing many areas from the terrorist organizations across  the country, inflicting heavy losses upon them in personnel and equipment.

A military source announced Wednesday morning that the army established full control over  Tallet al-Naqqar al-Gharbyieh (hill) to the east of Trinja in the northern countryside of the southern  Quneitra province after conducting special operations in the area.

The operations, which were carried out in cooperation with the popular defense groups during the past few  hours, resulted in the death of many terrorists and the destruction of their weapons and ammunition.

The source also noted that an army unit secured the road linking al-Amal Farms and Hadar.

Army units killed a number of Jabhat al-Nusra terrorists on Tafas- al-Yadoudeh road and to the north of al-Bitar Farm in the countryside of the southern Daraa province.

An army unit also destroyed a hideout for terrorist groups, a number of vehicles and a monitoring  center to the east of al-Kark prison in Daraa al- Balad area in Daraa province.

Army units killed more than 50 terrorists and destroyed a command center, an ammunition depot  and 6 cars, some equipped with machineguns, in Mourek, east of al-Buwaida, Skeik, Atshan and Wadi Hweir in  the northern countryside of Hama province.

More than 30 ISIS terrorists were killed on Wednesday in operations carried out by army units in Deir Ezzor and its countryside.

A military source told SANA that army units carried out operations and precise bombardments against positions and dens of the ISIS terrorist organization in the neighborhoods of al-Rushdiyeh and al-Sinaa and in al-Jafra village to the east of Deir Ezzor city.

The source added that more than 20 terrorists were killed and an amount of their arms and munitions were destroyed.

The source added that the army personnel defending Deir Ezzor Military Airport clashed with a terrorist group affiliated to the ISIS along the eastern barricade of the airport, killing ten of its members.

Another army unit destroyed three vehicles and killed most members of a terrorist group that had attempted to attack military positions in al-Jafra area 7 km southeast of Deir Ezzor city.

The army air force raids killed a number of the terrorists and destroyed a den for them and a number of vehicles.