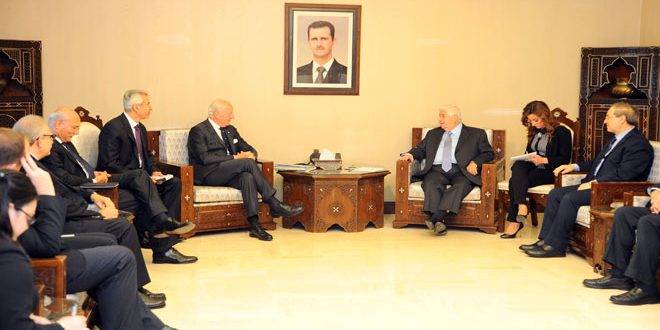 After de Mistura briefed the minister on the current efforts and ideas in the framework of finding a political solution for the crisis in Syria and the results of his recent meetings in a number of states, al-Moallem reiterated the Syrian government’s stance on the need to reach a political solution for the crisis by resuming the Syrian-Syrian dialogue led by Syria without any preconditions or external interference.

Al-Moallem stressed that only the Syrian people will determine their future in a way that preserves national unity and sovereignty.

The minister affirmed that the Syrian government continues to exert efforts in combating terrorism, protecting its citizens and delivering humanitarian aid for them, acting based on a sense of responsibility towards its citizens to alleviate their suffering due to the practices of armed terrorist groups.

He called on the UN to compel states sponsoring terrorism to respect the UN Security Council resolutions on combating terrorism, stressing the importance of a neutral and independent role of the UN away from any influences or intervention by which some regional and international countries seek to impose their own agendas on the Syrian people.