Three killed, over 70 injured in terrorist attacks, including with chemical weapons in Aleppo 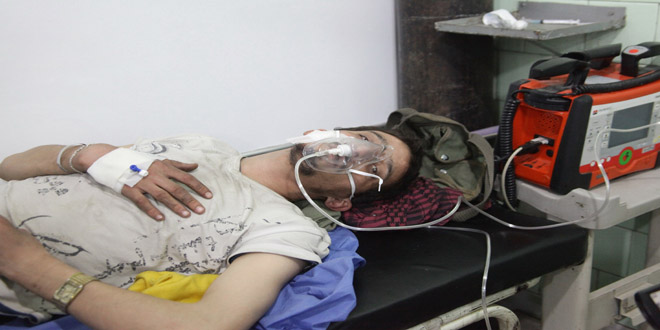 According to SANA reporter, more than 35 people suffered suffocation due to the attack, which was launched by the terrorist organizations positioned on the western outskirts of Aleppo city.

Upon visiting the injured in al-Jamiaa (University) and al-Razi hospitals, the reporter said the injured are suffering from vomiting, shortness of breath, mydriasis, numbness in the limbs and muscle spasms, adding that the medical cadres are taking all measures to prevent the health condition of the injured from getting worse.

In 2013, the terrorist organizations launched toxic gas attacks on a number of residential areas in the Eastern Ghouta of Damascus, al-Sukkari neighborhood in Aleppo city and a number of villages and towns in the northern countryside of Aleppo.

According to reports, members in the Turkish Parliament revealed on various occasions that the Turkish regime under Recep Tayyip Erdogan has provided the terrorist organizations in Syria with toxic gases and is protecting those who are involved in producing chemical weapons of sarin and other toxic gases.

Earlier, two persons, including a child, were killed and 6 others were injured in terrorist rocket shells attack on al-Hamadaniyeh and al-Meridian neighborhoods in Aleppo, according to SANA reporter in Aleppo.

The reporter quoted a source at Aleppo Police Command as saying that the terrorist organizations, positioned in the eastern neighborhoods of the city and some terrorist hotbeds in the western side of it, targeted with rocket shells al-Hamadaniyeh and al-Meridian neighborhoods in Aleppo, killing two people, including a child, and injuring 6 others.

The source added that the terrorist attacks caused material damage to the citizens’ houses and properties.

A woman killed, 30 injured in ISIS attacks in Deir Ezzor

In the same context, a woman was killed and 30 other people were injured due to ISIS shelling attack on al-Joura and al-Qusour neighborhoods in Deir Ezzor city.

A source at Deir Ezzor Police Command told SANA that 40 rocket and mortar shells hit the two neighborhoods, noting that five of the injured are in critical condition.