13 civilians killed, 43 others injured due to terrorist rocket attacks on Aleppo, Damascus 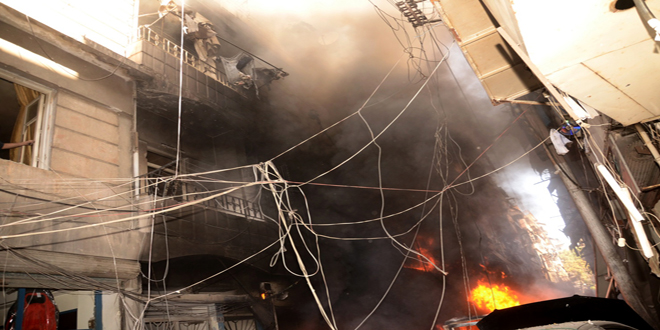 Aleppo/Damascus, SANA –Thirteen civilians were killed on Friday due to terrorist rocket attacks that targeted the neighborhoods of Sulaiman al-Halabi, al-Midan, al-Sulimaniah and al-Furqan in Aleppo city.

A source at Aleppo Governorate said that 9 persons were killed and 28 others were injured, including children and women, when terrorists targeted al-Sulimaniah and al-Furqan neighborhoods as worshipers were leaving mosques after Friday prayers.

The source added that the attacks caused significant material damage to a number of cars and houses in the two targeted neighborhoods.

Earlier, a source at Aleppo Police Command said that terrorist organizations positioned in some eastern neighborhoods fired rocket shells on Sulaiman al-Halabi and al-Midan neighborhoods, killing 4 civilians, injuring 10 others, 4 of them in a critical condition, and causing material damage to public and private properties.

Three people were injured when terrorists from Jaish al-Islam fired a rocket shell on Bab Touma neighborhood in Damascus.

A source at the Damascus Police Command told SANA that terrorists located in the Eastern Ghouta in Damascus Countryside fired a rocket shell at Bab Touma, with the shell falling in the main square of the neighborhood, injuring three people and causing material damage to properties.