The army establishes control over villages in Aleppo southern countryside 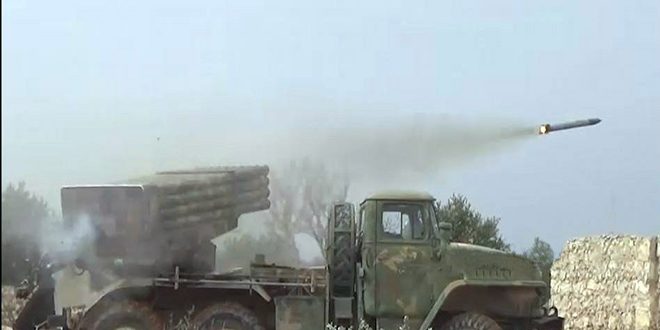 Provinces, SANA – More positions for terrorist organizations were hit during army operations in various areas across the country, where numbers of terrorists are being killed and their equipment, including heavy weapons and vehicles, destroyed.

Army units established control over al-Qarasi hill, al-Qarasi, al-Amarah and al-Baranda in the southern countryside of Aleppo and kill scores of terrorists and injure others, a military source told SANA.

The army’s progress came after fierce clashes with terrorist organizations that ended up with the killing and injuring of scores of terrorists and the destruction of their equipment.

An army unit carried out on Tuesday morning a special operation targeting positions of the terrorist organizations on the outskirts of Daraa al-Mahatta neighborhood in Daraa city.

According to a military source, a command center for terrorists was destroyed to the east of the Electricity Company, along with a number of vehicles equipped with machine guns and a bulldozer that was used for fortification purposes to the northwest of Garz granary.

A number of the terrorists were killed in the operation and others were injured.

Army and Armed Forces units carried out intensive operations targeting ISIS terrorists’ gatherings and movements in the perimeter of Deir Ezzor Airport and a number of neighborhoods in Deir Ezzor city.

A military source said that the Deir Ezzor Airport garrison clashed with terrorists who had been trying to infiltrate the Airport from its eastern fortifications, killing many of the attacking terrorists and destroying their weapons and equipment.

In the southwestern outskirts of Deir Ezzor city, and army unit killed a number of ISIS terrorists in a series of strikes on their fortified positions and in the surroundings of the Panorama area, the source said, adding that army units also targeted gatherings and fortified positions of ISIS terrorists in the neighborhoods of al-Orfi, al-Sina’a, and al-Rasafa, killing and injuring a number of terrorists and destroying their weapons and munitions.

Army and Armed Forces units destroyed two bases for terrorists in al-Rastan city in the northern countryside of Homs province.

SANA reporter said that army units carried out special operations targeting the fortified positions of terrorists in al-Rastan, which resulted in destroying two bases for “Ahrar al-Cham” and “Rejalullah” terror organizations, in addition to killing a number of terrorists including Khaled al-Murrei, Farid al-Rez, and Qassem al-Rez.