The army destroys many vehicles, two weapons and fuel depots and a command center for terrorists 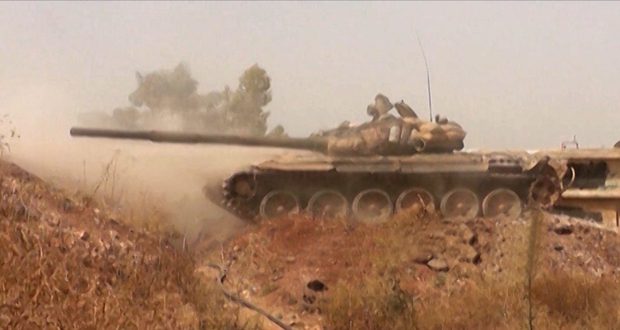 Provinces, SANA – A military source confirmed on Sunday the destruction of vehicles, two arms and fuel depots and a workshop for making explosive devices for “Jaish al-Fatah” and ISIS during army sorties on their sites in the countryside of Aleppo, Homs and Idleb.

The source said the Syrian Air Force carried out 35 sorties by combat bombers and 21 sorties by helicopters to support the ground forces and strike the gatherings and dens of terrorists in the countryside of Aleppo, Homs and Idleb during the past 24 hours.

The source affirmed that the air strikes also resulted in killing a number of terrorists and destroying fortified positions in Tallet al-Sanawbar, al-Qarrasi and al-Mansoura and three vehicles equipped with machine guns to the south of the Arming Faculty, Project 1070 and al-Mishirfeh Hill in the western and southern countryside of Aleppo.

A workshop used by terrorists for making explosive devices and a car bomb were also destroyed in air strikes that
hit ISIS positions in Deir Hafer in the eastern countryside of Aleppo.

Meanwhile, terrorist organizations acknowledged on their social media pages the death of many of their members, including the “field official Jabhat al-Nusra-linked al-Sheikh Ali Battalion” who is nicknamed Abu Fayssal al-Halabi.

In Homs, the strikes destroyed a weapons depot in Talbiseh and a rocket launcher and a fuel depot in Teir Maala in the province’s northern countryside. A number of ISIS terrorists were killed or injured in the surroundings of al-Shaer gas field and to the east of Tadmur (Plamyra) city.

In the northern countryside of Idleb province, three trucks transporting terrorists were destroyed to the south of Hazano town.

Army units destroyed fortified positions for the terrorist organizations south of Daraa Dam and in separate areas in Daraa al-Mahatta and in the western side of al-Nuaimeh town in Daraa countryside.

Terrorist groups and mortar launcher pads in al-Arba’in neighborhood in Daraa al-Balad were targeted by an army unit.

A command center for terrorist organizations southeast of al-Karak water tank and a number of vehicles east of the electricity company in Daraa al-Mahatta neighborhood in Daraa city were also destroyed.