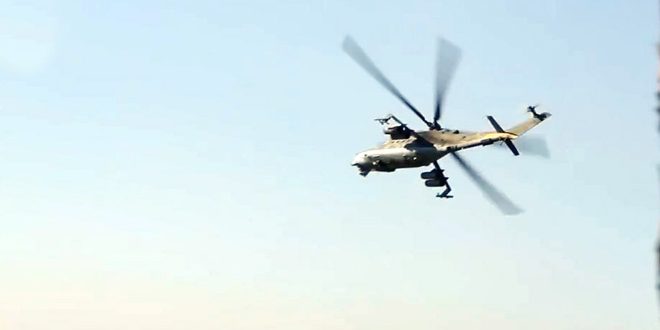 Provinces, SANA – The Army and Armed Forces continued on Wednesday targeting terrorist organizations across the country, with the Syrian Air Force targeting ISIS positions and vehicles in Hama and Deir Ezzor provinces.

Army units eliminated the remaining gatherings of terrorists in the south eastern farms of Housh al-Farah town in Eastern Ghouta.

A military source told SANA that army units, in cooperation with popular defense groups carried on fierce clashes with the terrorist organizations during the past hours in the strategic depth of Eastern Ghouta which ended by establishing control over the south eastern farms of Housh al-Farah town.

A military source told SANA that the Syrian Air Force destroyed ISIS fortified positions north of al-Mufagar and in Hur Benafsoh in the countryside of Hama province.

The army units killed ISIS terrorists and destroyed their vehicles,equipped with heavy machine guns north al-Awameed hill and west al-Khanzeer Mountain to the south east of al-Qariyatain in Homs countryside.

An army unit, in cooperation with popular defense groups, launched intensive strikes agaisnt the gatherings and fortified positions of Jabhat al-Nusra in the countryside of Quneitra.

SANA reporter said that during the strikes, one of al-Nusra sites and a heavy-equipped vehicle were destroyed in the villages of al-Kahtanya and Rasm al-Bida to the southwest of al-Baath City.

Army operations Syrian Air Force 2016-07-27
Hazem al-Sabbagh
Share
Previous Woman killed, five injured in terrorist sniper attack in Aleppo
Next Army units establish control over a number of blocks of buildings in the direction of al-Liramon and al-Khalidia in Aleppo