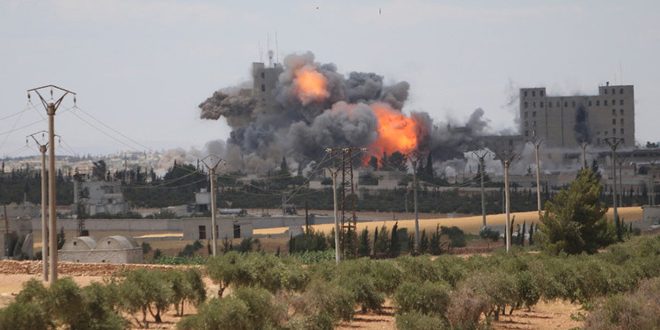 Baghdad, SANA – Commander of the so-called International coalition for fighting ISIS Christopher Garver acknowledged his forces’ responsibility for killing tens of civilians in Syria in raids carried out on Manbej city, north Aleppo, several days ago.

Garver claimed in a press conference held in Baghdad to journalists interacted with him through a TV channel from Washington that “the raid was basically targeting buildings and vehicles of ISIS, “pointing out that the following reports from different sources referred to the possibility that civilians were maybe with the terrorists used by them as human shields.

He added that investigations are being carried out in the strikes launched by the coalition without giving specific numbers of the victims but he expected that their number ranges between 15 to 70 civilians according to the reports as he claimed.