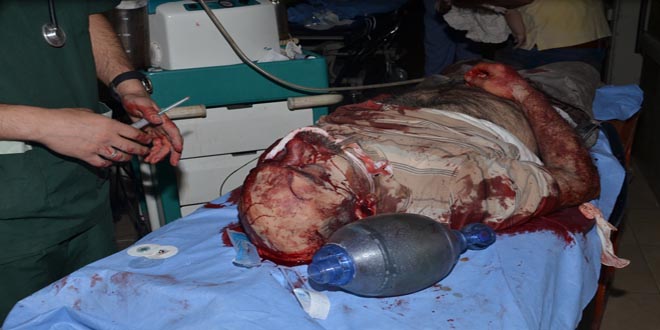 Aleppo, SANA – The death toll from the terrorist attacks that targeted Aleppo city in the past 24 hours rose to 33, in addition to more than 165 injured.

A woman and 9 children were among the dead, according to a source at Aleppo Police Command.

The source explained to SANA that 21 people were killed and others were injured by dozens of shells that hit in al-Midan and al-Ashrafiyeh neighborhoods and in the vicinity of Saadallah al-Jabiri Square and al-Qasr al-Baladi (Municipal Palace).

Houses and other properties for the locals sustained massive material damage due to the rocket shells that are stuffed with highly explosive materials.

The source also said that terrorists fired rocket shells on al-Jamiliyeh and al-Mohafaza (governorate) neighborhoods, leaving 8 people dead and many others injured and causing material damage to the hospital and the locals’ houses.

Earlier on the day, the source told SANA that terrorists positioned in Bustan al-Qassr neighborhood fired rocket shells on al-Meridian neighborhood in the city, claiming the lives of a man and his wife after their house was toppled onto their heads and injuring other people.

The source added that a sniper from Jabhat al-Nusra-linked terrorist groups positioned in Bustan al-Qassr neighborhood opened fire on locals in al-Masharqa neighborhood, leaving two people dead.
In the afternoon, terrorists targeted with two rocket shells al-Razi Hospital where victims of the terrorist attacks are being hospitalized. The shells hit the hospital’s main entrance and caused huge material damage to the site.

On Wednesday, 10 civilians were killed, including a child, and 37 others were injured in similar terrorist attacks on residential neighborhoods in Aleppo city.
Army units then targeted the sources of the shelling and shooting and destroyed a number of mortar launchers and artillery positions.