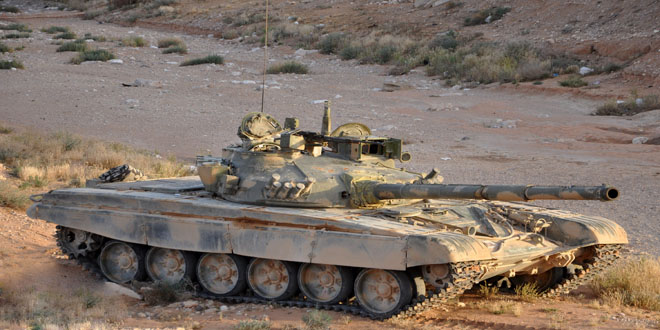 Provinces, SANA- Syrian Arab Army units, backed by the Air Force, continued on Wednesday targeting positions of terrorist organizations in various areas across the country, killing more of their members and destroying a number of their dens and vehicles.

The Syrian army’s air force destroyed a position for Jabhat al-Nusra terrorists in Kfar Sijneh village in Idleb countryside, according to a military source.

In the meantime, media outlets confirmed that the terrorist Saoud Assaf Abu Mazen, a leader within the so-called “Ansar al-Haq Brigade” that is affiliated to “Ahrar Al-Sham Islamic Movement”, was killed in a blast of an explosive device in his car on a road close to Maasran village in the southern countryside of the province.

In the neighboring province of Hama, an army unit killed, in a special operation, 8 Jabhat al- Nusra terrorists to the west of Arbaeen village in the northwestern countryside of the province, according to the source, which confirmed also the destruction of an ammunition-loaded car.

For his part, SANA reporter quoted a a source on the ground as saying that an army unit, in cooperation with the popular defense groups, clashed with terrorists affiliated to Jabhat al-Nusra in the vicinity of al-Suteihat and Khneifes villages in the eastern countryside of Hama, inflicting losses with the terrorists’ ranks and destroying one of their vehicles.

The source also confirmed the death of the terrorist Mousa al-Sawan in an mine explosion at the crossroads of al-Emiya village to the east of Saan town.

The army’s air force destroyed a convoy of vehicles for ISIS terrorist organization in the area east of the Oil Station 3 in the eastern countryside of Palmyra in Homs province.

An army unit destroyed a vehicle equipped with a machinegun for ISIS terrorists in al-Qassr village in the northeastern countryside of Sweida province.

An army unit destroyed 2 command centers belonging to Jabhat al-Nusra terrorist organizaiton and killed a number of their leaders in the neighborhoods of al-Hamadin and al-Abassyia in Daraa al-Balad area in Daraa province, according to a military source.

The source added that almost all the members of a terrorist group were killed during an army operation to the south of al-Manshia neighborhood in the same area.