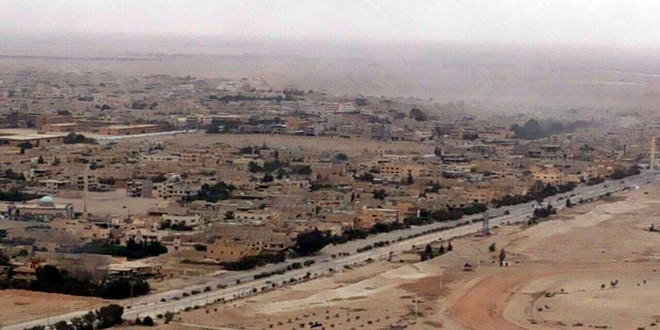 The operations have resulted in establishing full control over the neighborhoods of al-Mutaqa’idin, al-Ameriyeh and al-Jamiyat al-Gharbiyeh in Tadmur city,  according to sources on the ground.

Al-Ameriyeh neighborhood, where heavy clashes took place between the army units and ISIS groups since early this morning, is considered the last line of defense for ISIS, whose members had planted dozens of mines and explosive devices inside the neighborhood to hinder the army’s advance.

According to the sources, the army units also launched intensive military operations towards the southern orchards, achieving important advances towards the city.

The sources added that violent clashes also are going on in the vicinity of Palmyra airport in the eastern of the city.

During the past two days, the army seized the archaeological Palmyra castle, Wadi al-Qobor, al-Qosor Mountains, the Qatari palace and all hills surrounding the city.

Army units established control over two positions in the eastern countryside of Hama after inflicting heavy losses in personnel and munitions upon ISIS terrorists.

Army units carried ou a special operation against dens and gatherings of ISIS terrorist organization in Aqareb area 31 kilometers to the east of Hama.

The operation ended by establishing control on two new sites to the west of Aqareb Dam and Tabaret al-Deibeh in addition to killing 10 terrorists from ISIS organization and destroying three vehicles equipped with heavy machine guns.

Engineering units combed the two positions and dismantled the explosive devices which were planted earlier by terrorists to hinder the advance of the army.