New season of Opera House starts with “Syria… My Homeland”-VIDEO 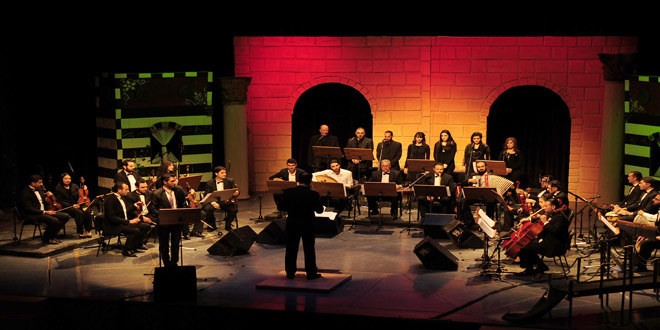 Damascus, SANA- Dar Al Assad for Culture and Arts “Opera House” started on Monday its new season for this year with a national musical evening entitled “Syria… My Homeland” presented by the National Orchestra for Oriental Music and led by the Maestro Nazih al-Asa’ad.

The songs embodied love for Syria and praised the beauty of Syria’s nature and civilization.

Journalist Idris Murad, the evening’s innovator and supervisor, told SANA “The crisis which we have been living for five years produced a Syrian creative situation concerning the national song, and this evening is the first step of its kind for “The Opera House” in producing new national songs.”

The National Orchestra for Oriental Music, led by al-Asa’ad, was founded in 2012 under the patronage of Music and Theaters Directorate at Ministry of Culture.

It performs Arabic music in particular and oriental in general combining the classic and modern styles and it consists of 50 musicians and singers, most of them are from the Damascus Higher Institute of Music and Homs Music College.