Army establishes control over more areas, kills scores of terrorists across the country 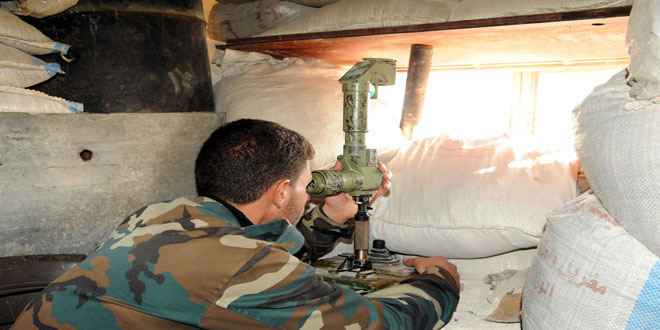 Provinces, SANA- The army units, aided with the army air force, continued targeting the Takfiri terrorist organizations’ hotbeds, gatherings and hideouts in many areas across the country, inflicting heavy losses upon them in personnel and equipment.

An army unit destroyed Jabhat al-Nusra terrorist’s hideouts with all terrorists inside south of the Court’s vicinity in Daraa al-Balad neighborhood in the southern Daraa province.

A military source told SANA Tuesday that terrorists’ headquarters and gathering were destroyed in al-Bado neighborhood with all weapons and ammunition inside.

Meanwhile, Takfiri terrorist organizations acknowledged on their social media websites the killing of a number of their members, including terrorists Adman Mustafa al-Hilal and Mohammad Abdel-Rahman al-Saadi.

An army unit clashed with terrorists who attempted to attack AzizeIt  Sama’an village in the southwestern countryside of Aleppo province, destroying a  mortar cannon, a heavy cannon, a heavy-equipped machinegun, an armored vehicle and  killing a number of them, while the rest fled away.

The army units destroyed terrorist organizations’ gatherings with all weapons and equipment in Kafernaha and west of al-Hader in the southern and southwestern countryside of the province.

Another army unit destroyed Islamic State in Iraq and Syria (ISIS) terrorists’ vehicles, some equipped with heavy machineguns in the village of Hazazeh, 52km east of Aleppo city.

The army units ambushed armed terrorist groups which tried to infiltrate from al-Tamana’a town into the military posts positioning in the hills of Mourek town, 35km north of Hama city.

The military source affirmed that the army killed a number of terrorists and destroyed 5 vehicles of Jabhat al-Nusra-linked terrorist organizations and seized amounts of weapons and ammunition which the terrorists left behind as they were fleeing away. The sources added that 4 terrorists were killed, among them nicknamed Mohammad Ibrahim al-Anjour of the so
-called gathering of al-Izza Battalions and Brigades at the surroundings of Kafer Zaita town.

Another army unit destroyed 3 vehicles affiliated to the so-called Jound al-Aqsa terrorist organization,
killing at least 10 of terrorists in the forests near al-Habit village. The army seized weapons and ammunition, including 3 mortar bases, and dismantled scores of explosive devices planted by terrorists before they had fled these areas.