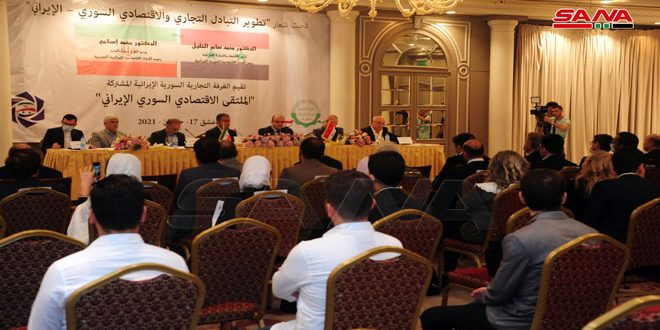 Damascus, SANA- Syrian-Iranian trade and economic forum debates focused on the most prominent stages of cooperation between the two countries and ways to develop them and overcome the difficulties facing joint trade and economic relations. Minister of Economy and Foreign Trade, Muhammad Samer al-Khalil stressed that efforts are exerted to raise the levels of bilateral trade exchange, discuss areas of cooperation through products between the two countries, the mechanisms of this exchange and the nature of materials, in addition to cooperation in the field of investment and projects to be implemented by Iranian companies and joint projects at the governmental and private sector levels, raising the levels of trade exchange and mechanisms that help facilitate the exchange of goods and financial transactions between the two sides in a way that helps overcome obstacles for Iranian and Syrian companies. Minister al-Khalil called on the Chambers of Industry, Agriculture and Commerce and the Syrian-Iranian Joint Chamber of Commerce to submit a list of materials that can be exported and imported from and to Iran, and the values and quantities of materials, in addition to the needs of the public sector.

Iranian Minister of Roads and Urban Development, Mohammad Eslami, stressed that within the framework of joint economic cooperation, decisions were taken and programs were put to develop trade and investment exchanges, and it was also agreed to establish the Central Committee for Reconstruction in Syria.