President al-Assad: existence of Israeli entity in the region based on terrorizing its people and assaulting their rights 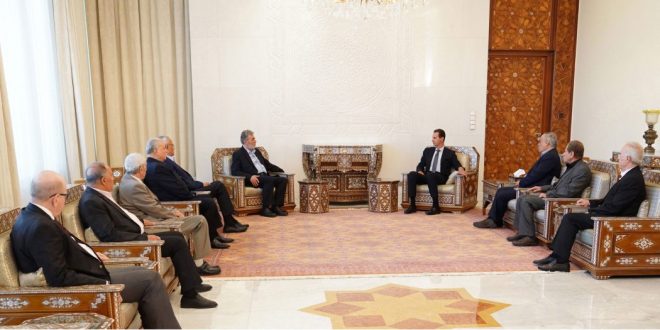 Damascus, SANA-President Bashar al-Assad on Thursday received a number of leaders and representatives of Palestinian factions and powers.

Talks during the meeting dealt with the latest developments in the Palestinian lands and the Israeli continued aggressions on the Palestinian people, as well as the occupation practices aiming at displacing the Palestinians from their lands in al-Quds in order to change the status-quo and feature of the city.

During the meeting, President al-Assad affirmed that the Israeli entity doesn’t understand the language of peace, nor dialogue, as its existence in the region is based on terrorizing its people and assaulting their rights.

The President renewed Syria’s firm stance towards Palestine as a central issue and supporting the Palestinian peoples’ struggle and their legitimate resistance in self-defense and restoration of their rights.

They said that the latest incidents in Palestine, and the Israeli occupation massacres and destruction of the Palestinian people affirm that the resistance choice is a key for the restoration of the usurped rights and lands.