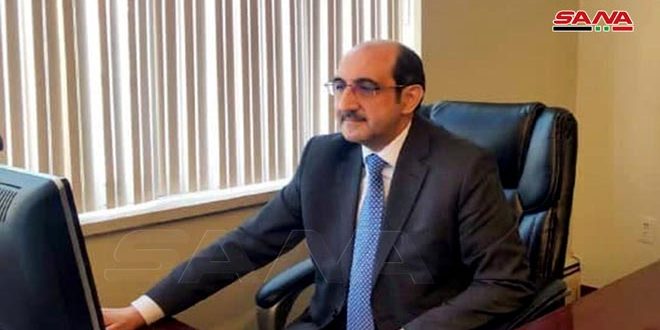 New York, SANA-Syria has called on member states at the Organization for the Prohibition of chemical weapons (OPCW) to not be driven to a US-French draft resolution submitted to the Conference of states parties in the organization and confront it to avoid dangerous repercussions on the work of the Organization.

“The draft resolution aims to find new pretexts to perpetrate hostile acts and encourage terrorist organizations to perform fabricated chemical scenarios in service of the US-western hostile policies,” Syria’s permanent representative to the UN, Bassam Sabbagh, said during a session for Security council via video on Thursday.

He added that Syria strongly rejects the hostile, politicized method against it and calls for halting this method.

“Syria, at the same time, calls on the member states at OPCW to substitute that method with an objective approach and hold constrictive discussion that allows the Organization to work according to the technical feature it was based on,” sabbagh said.

He added that Syria has repeatedly condemned the use of chemical weapons by anyone, in any place and under any circumstance, and affirmed that it has never used chemical weapons.

2021-03-04
Mhamad
Share
Previous Lavrov: Russian approach to find settlement to crisis in Syria is based on international law
Next Several QSD militants killed, others injured in attacks in Hasaka, Deir Ezzor countryside

Budapest, SANA- Forum of “for Syria “in Hungary affirmed that the Syrian people’s unity was …