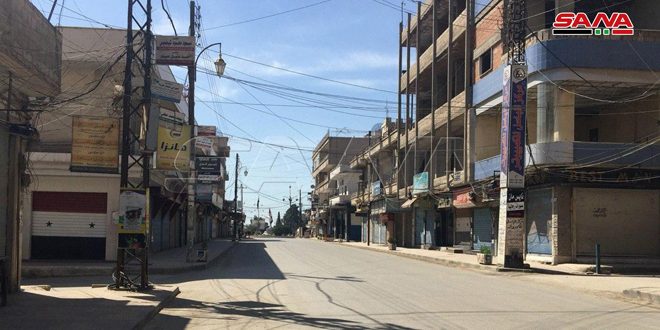 Hasaka, SANA- US backed-QSD militia on Wednesday set up its checkpoints in several neighborhoods and streets in Qamishli city and near al-Baath bread facility following the start of lifting the siege imposed by this militia for 20 days.

SANA reporter in Hasaka said that following the start of lifting its unfair siege against the civilians in Halko and Tayy neighborhoods, QSD militia set up its checkpoints near al-Baath bread facility, the youth city, al-Burj street and near the roundabout of the court, in addition to putting the screws on the civilians through tightening its arbitrary measures on a number of checkpoints which were constructed  at the entrances of the neighborhoods.

The reporter added that QSD militia prevented the trucks carrying flour from entering the center of Hasaka city and al-Baath bread facility, so the public and private bread facilities continue to stop working.

The reporter pointed out that QSD militia kidnapped a number of civilians, asserting that an armed group affiliated to the militia attempted to kidnap one of the tribes’ elders from Tayy clan before he was able to escape from them at the entrance of the neighborhood where he is living.