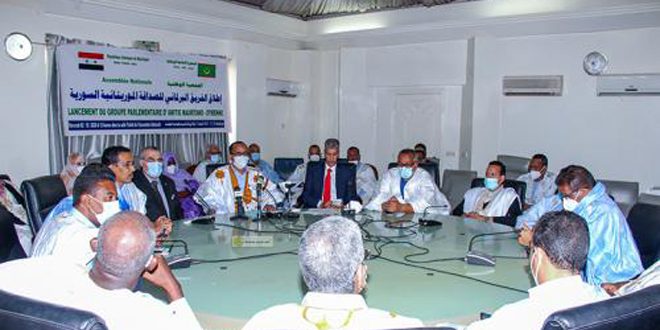 Nouakchott, SANA-National Assembly of Mauritania announced the launching of a parliamentary Syrian, Mauritanian Friendship Committee to boost aspects of cooperation between the two countries in the interests of the two brotherly peoples.

“Mauritania and Syria are linked by distinguished relations which were enhanced by common interests for both peoples and their legitimate aspiration of contacts and integrity, Mauritanian News Agency quoted deputy Chairman of the Assembly, Saidi al-Talib al-Nafe’e as saying.

He added that the bilateral relations have given fruits to cooperation in different developmental domains, particularly in culture.

Nafe’e pointed out to the important role played by the parliamentary diplomacy in rapprochement among peoples and development of cooperation relations among counties.

Chairman of the Syrian, Mauritanian Parliamentary Friendship committee, Al Sayyed al-Mustafa Blah Souhaib, for his part, said that boosting and strengthening relations among the states have formed one of the Mauritanian diplomatic principals throughout more than half century, referring to prospects of cooperation among the states through which thousands of Mauritanian students have acquired experiments from the Syrian universities.

On his part, charge d’ Affairs of the Syrian embassy in Nouakchott, Murtada al-Jamal, added that the establishment of the committee was a reflection of the deeply-rooted diplomatic relations between the two countries, affirming that work in underway on the level of the People’s Assembly to form a similar committee.

2020-12-05
m.eyon
Share
Previous Temperatures to drop, rain showers expected in some regions
Next Al-Kuzbari: fourth round of the Committee of Discussing the Constitution discussed national principles and return of refugees