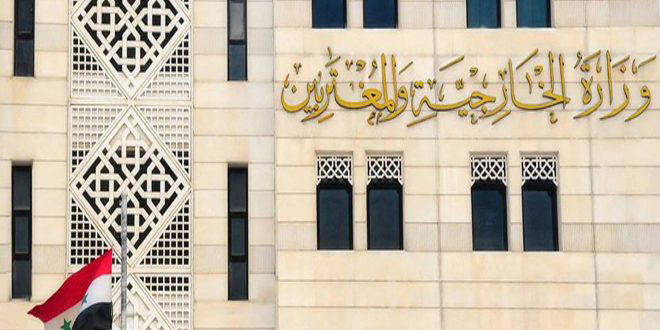 Damascus, SANA-Syria condemned in the strongest terms the US Secretary of State’s visit to the Israeli settlements in the occupied Syrian Golan, considering the step as a flagrant violation of its sovereignty.

“The government of the Syrian Arab Republic condemns in the strongest terms Mike Pompeo’s visit to the Israeli settlements in the occupied Syrian Golan in a provocative step prior to the end of Trump’s administration and at a time when the Israeli occupation authorities launch repeated aggressions on Syria, the latest of which was on Nov.17th,” An official source at Foreign and Expatriates Ministry said on Thursday.

The source added that Syria affirms that such criminal visits encourage “Israel” to continue its dangerous aggressive method that would not have taken place without the unlimited and continued support provided, in particular, by the US administration and the immunity from accountability provided and imposed by these countries.

It stressed that Syria calls on the UN and the International Community to condemn that visit which violates the UN resolutions, including the UN Security Council resolution no 497.

The source concluded that Syria calls once again on the UN Security Council to assume its responsibilities in the framework of the UN Charter to  oblige “Israel” to stop its flagrant violations of the UN Charter and the provisions of the International Law and respect for international legitimacy resolutions, particularly UN Security Council Resolutions no. 242, 338, 350 and 497 which all call for the Israeli withdrawal from the occupied Syrian Golan until the line of June 4th , 1967.