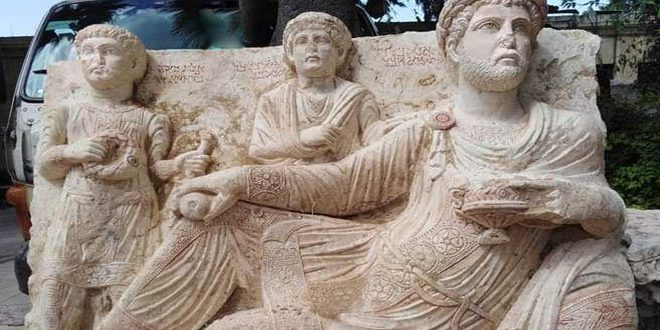 Damascus, SANA – The edifies and funeral buildings of Palmyra have constituted valuable scientific material for archaeologists as they adopted a study and research that distinguished between those intended for the public class of the Palmyrene community and the huge funeral cemeteries of the rich class.

The Palmyrene funerary monuments are of great importance because it is one of the oldest remains of Palmyra, as most of them date back to the first century AD.

Even the symbols of these monuments and their meanings related to the world of death and its associated concepts, for this they were classified into several groups according to the inscriptions and images they carried.

The funerary tombstones known in al-Tadmuriyyah (Palmyrene) language as “Nafsh”, which means the person or the soul. i.e. it was a representation of the buried person, as it was planted inside a group of small stone pieces above the grave, where an inscription in al-Tadmuriyyah was engraved indicating the deceased, while we find other tombstones containing the funeral feast which represents the Palmyrene family with all its members.

In a statement to SANA, archaeologist Dr. Khalil al-Hariri clarified that the rituals of burying the dead in Palmyra took into account the family life, as funeral scenes carved in stone and placed in front of the grave or above the funeral bed included images of a group of the dead’s family members.

In this regard, the most important archeological discoveries was the tombstone for a reclined Palmyrene man and two other persons stood beside him, al-Hariri said.

He added that the name of the reclining man is Elabel Bin Tema, while the two other standing persons are his son and his servant freed from slavery.

The archeologist indicated that this information revealed by the Palmyrene writing inscribed on the shoulder of each of them.

Al-Hariri mentioned that Elabel family was famous in Palmyra and they had the Elabel Cemetery, which was founded 103 AD.

The Palmyrene texts says that this family had a great role in building the Temple of Nebo, and this sculpture clearly indicates that this person was a prince or military commander.