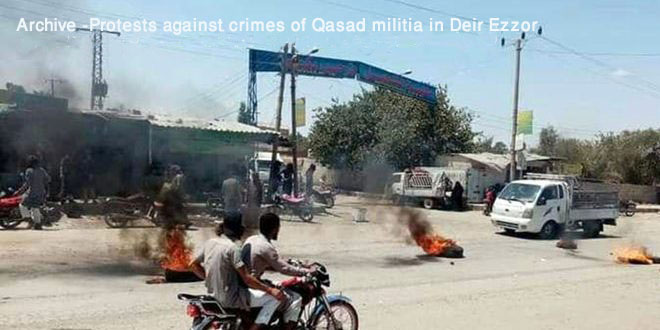 Deir Ezzor, SANA – A military vehicle affiliated to the US-backed Qasad (SDF) militias was targeted by an explosive device on Monday, at a time when more and more protests are taking place in Deir Ezzor demanding the expulsion of Qasad and the US occupation forces from the Syrian al-Jazeera area.

Local sources said that an explosive device planted by unknown persons went off on Monday afternoon in a military vehicle belonging to to Qasad militias in al-Sha’fah town in Deir Ezzor eastern countryside.

The sources added that Qasad groups have surrounded the site of the blast, and that the scale of the damage caused by the explosion is not known.

On Sunday, unknown persons targeted a convoy of vehicles for Qasad on the road between al-Shadadi city south of Hasaka and Omar oil field in Deir Ezzor southeastern countryside.