Defense Minister: Syria is a role model for confronting terrorism 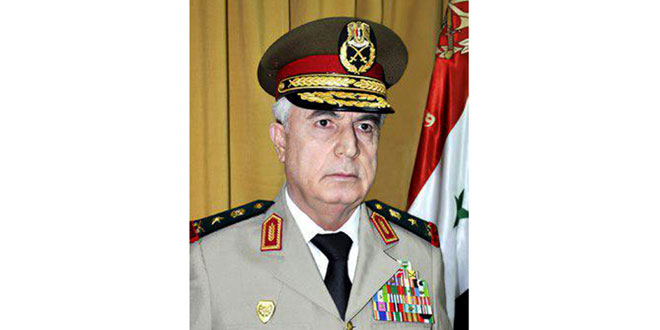 Damascus, SANA – Chief of the General Staff of the Army and Armed Forces, Defense Minister Gen. Ali Abdullah Ayoub affirmed on Saturday that terrorism is being defeated by virtue of the legendary steadfastness of Syria’s people, army, and leadership, pointing out that Syria is setting a role model to the world for confronting terrorism, adding that victory is almost at hand.

During a telephone call with the Syrian TV on the 75th anniversary for establishing the Syrian Arab Army, Ayoub congratulated army personnel and the Syrian people and leadership on this occasion, saying that the martyrs and the wounded are the real heroes who embody steadfastness and realized achievements.

He said that the Syrian Arab Army will remain steadfast until achieving victory, as there is no other option as President Bashar al-Assad had said more than once.

Ayoub stressed that our war against terrorism continues until terrorism is uprooted completely whenever it may be, and just as the Syrian Arab Army has liberated a lot of areas, it will liberate every inch of Syria from terrorism, because we have no choice other than winning.

He affirmed that the enemies of Syria will not be able to use policies of blockade and starvation to take what they failed to take before during the years of war.

Ayoub said that Syria does not stand alone in confronting terrorist war, as there are true friends and allies who share Syria’s conviction in the inevitability of achieving victory.