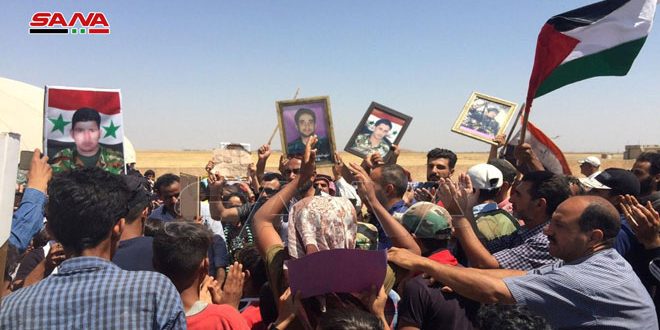 Hasaka, SANA- Locals in Farfara village in Qamishli countryside on Saturday staged a stand in protest against the US and Turkish occupation to Syrian territories and in condemnation of the unilateral  and coercive economic measures imposed on Syria .

The protesters burned the American flag in denunciation of the so-called “Caesar Act“ which targets the Syrian citizen’s livelihood , expressing rejection of the US occupation and its criminal practices against the Syrian people. In a statement to SANA reporter, the locals in Farfara village expressed rejection of the US occupation and called for expelling it from the Syrian territories.

They also voiced support to the Syrian Arab Army until achieving victory, eliminating all terrorist hotbeds and expelling the illegitimate foreign forces from the Syrian lands.