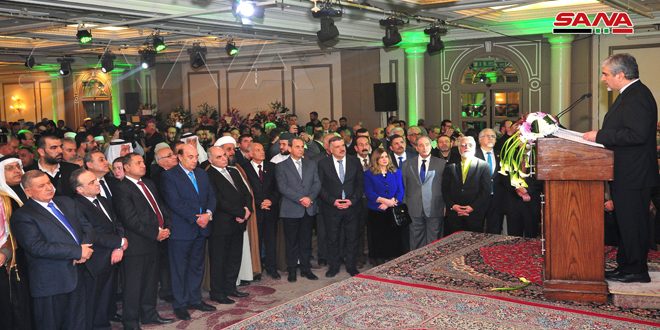 In his speech during the ceremony, the Iranian Ambassador in Damascus Javad Turk-Abadi underlined that his country will continue supporting Syria in its war against terrorism and in the reconstruction of what the terrorists have destroyed.

Turk-Abadi reiterated Iran’s support to Syria’s sovereignty and territorial integrity, asserting that only the Syrian people have the right to determine the future of their country without any foreign interference.

The Iranian Ambassador hailed the victories achieved by the Syrian Arab army led by President Bashar al-Assad against terrorism.

For his part, Deputy Foreign and Expatriates Minister Fayssal Mikdad said that Syria is fighting terrorism on behalf of entire world, asserting that the Syrian Arab Army will continue its battles against the terrorist organizations till restoring security and stability to all the Syrian territories.

Mikdad hailed Iran and Russia’s supportive stances towards Syria and their standing by Syria in its war against terrorism.