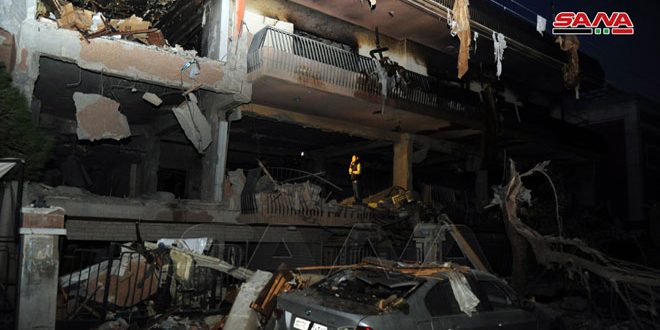 Jerusalem, SANA- The Palestinian Foreign Ministry on Tuesday condemned the Israeli brutal aggression on the besieged Gaza Strip and al-Mezza area in Damascus which claimed the lives of a number of people and injured others, in addition to causing huge material damage to the buildings and properties.

In a statement quoted by the Palestinian Wafa news agency, the Foreign Ministry called upon the international community and the UN Secretary General to immediately interfere to oblige the Israeli occupation authorities to stop their aggression on Gaza strip.

Two persons were martyred, one of them the son of the Palestinian al-Jihad Movement’s leader Akram al-Ajouri, and 10 others were injured in an Israeli attack with a number of rockets on a building near the Lebanese Embassy in al-Mezza area in Damascus.

While three Palestinians were martyred including leader of the Palestinian al-Jihad Movement Bahaa, and his wife, in addition to the injury of others including four of Abu al-Atta’s sons, due to the Israeli continued aggression on Gaza strip since Tuesday dawn.

The Israeli aggression on Gaza Strip also caused a huge material damage to the Palestinians’ houses and properties.