With Syria’s participation, the signing of UHC2030 Global Compact in Oman 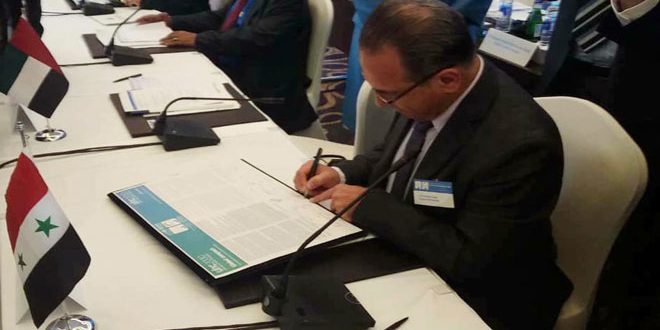 Muscat, SANA-Syria signed a Universal Health Coverage Global Compact (UHC2030) aiming at demonstrating a high level of commitment to take action to make progress towards universal health coverage by all countries of the Eastern Mediterranean region.

The Compact also aims at enhancing the commitment of states to develop a vision and implement national programs to move towards universal health coverage.

The signing of the Compact took place within a ministerial meeting of health ministers and representatives from 22 countries from Eastern Mediterranean region in the Omani city of Salalah under the title of the “Ministerial meeting on the road towards universal health coverage”.

In a press statement, Health Minister Nizar Yazigi said that preventive and curative health services to all citizens via hospitals, health centers, and mobile clinics.

On the sidelines of the meeting, Yazigi discussed with his Omni counterpart Ahmed Mohammed Obaid Al Saidi means of bolstering bilateral cooperation in the health sector.

Yazigi also discussed with WHO Regional Director for the Eastern Mediterranean, Dr Ahmed Al-Mandhari the health cooperation between the two sides and importance of supporting efforts to rehabilitate the heath institutions damaged due to terrorism, in addition to providing heath sector with non-locally produced medicines and medical equipment affected by unilateral coercive measures imposed on the Syrian people.

Universal health coverage (UHC) ensures that all people and communities can use the promotive, preventive, curative, rehabilitative and palliative health services they need, of sufficient quality to be effective, while also ensuring that the use of these services does not expose the user to financial hardship.

Meanwhile, the WHO statistics show that 100 million people worldwide suffer from poverty as a result of spending on health care, of whom 7.7 million live in the Eastern Mediterranean Region.