Cuban MP: Syria will rise again and its people will rebuild what has been destroyed by terrorism 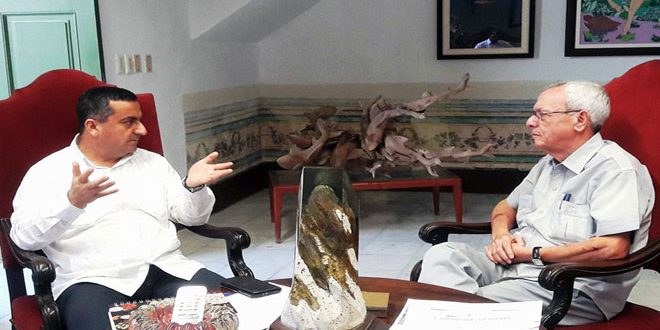 Havana, SANA – Syria will rise again and the Syrian people will rebuild what has been destroyed by terrorism, Cuban parliamentarian and Havana’s city historian Dr. Eusebio Leal Spengler said.

During his meeting with Syrian ambassador to Cuba Dr. Idris Mayyaa on Friday, Spengler hailed the steadfastness of the Syrian people and the sacrifices and heroism of the army.

He voiced his happiness over the victories achieved by the Syrian Arab Army in the eastern Ghouta against terrorist groups.

Spengler strongly condemned the acts of destruction and vandalism carried out by terrorist groups in several archaeological sites in Syria, especially in Palmyra, Aleppo and Maaloula, which indicate the barbarism of these groups and their dark takfiri beliefs.

He stressed that Syria can count on its many friends in the world, of which Cuba is one of them.

The Cuban parliamentarian pointed out that the enemies of Syria tried to destroy the unique example it enjoys in terms of stability and coexistence among the components of its society by inciting sedition which was foiled by Syrian people.

In turn, Mayya gave an explanation about the situation in Syria and the systematic targeting of archeological and historical sites by the foreign-backed terrorist groups, stressing that one of the objectives of the terrorist war against Syria is to obliterate its cultural and historical features.

Dr. Spengler is one of the most important Cuban figures. He is a historian, politician, member of the parliament and the Central Committee of the Communist Party of Cuba, the goodwill ambassador of the United Nations. He was awarded many medals of honor for his great role in maintaining the Cuban identity.