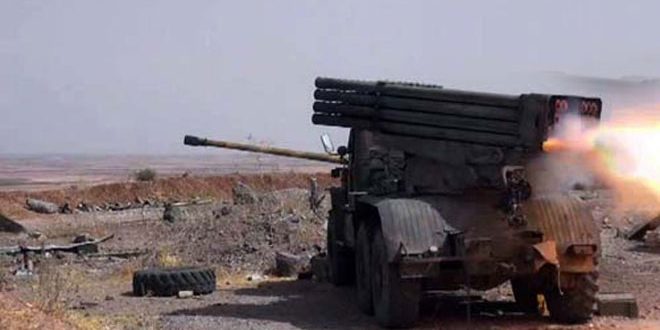 Earlier, the source said that an army unit clashed with an ISIS terrorist group that was trying to infiltrate from the direction of Jabbab Hamad village towards one of the military points east of Umm al-Tababeer village in the eastern countryside of Homs, a military source said.

The source added that the clashes ended up with eliminating all members of the terrorist group and destroying the weapons and ammunition were in their possession.

According to the source, army units also thwarted an attack by Jabhat al-Nusra terrorist groups on a number of military points from the direction of Jawalak-al-Mahatta-Sensil in the eastern countryside of Homs, eliminating a number of terrorists and destroying their weapons and ammunition.

Later, an army unit, in cooperation with supporting forces, thwarted an attack carried out by Jabhat al-Nusra terror organization and groups affiliated to it in the southwestern part of Damascus Countryside.

SANA’s reporter in Quenitra said that the army and supporting forces that attempted to sneak from Beit Jinn farm towards al-Tal al-Ahmar in the surroundings of Harfa village, attacking farmers who were harvesting wheat in that area.

The reporter said that the clashes resulted in killing a number of terrorists, injuring others, and destroying the weapons, ammo, and vehicles that were in their possession, adding that terrorists also targeted with mortar shells and machinegun fire homes in Harfa village, causing material damage and fires in cherry and olive orchards.