Army expands control in northern countryside of Hama, targets terrorists in other areas 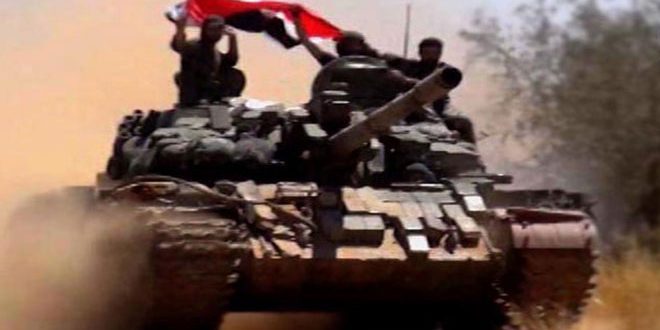 Provinces, SANA – Army and Armed Forces units on Saturday made new advances in its ongoing military operations against Jabhat al-Nusra and terror groups affiliated to it in the northern countryside of Hama province.

SANA’s correspondent in Hama said that army units, in cooperation with supporting forces, engaged in violent clashes with terrorist groups in al-Nasseriye and al-Mintar hills, killing and injuring many terrorists in the process and establishing control over a strategic point north of Souran near the turnpike leading to the town of Lahaya, in addition to establishing control over the farms of al-Nasseriye town located between the towns of Helfaya and Tibet al-Imam.

The correspondent said that clashes were preceded by targeting terrorists’ positions in the front lines with intensive volleys of rockets, which resulted in destroying several fortified positions and killing large numbers of terrorists, including Shahoud Abu Ali who was a field commander of Ahrar al-Cham Movement terror group.

Army units also carried out intensive special operations targeting terrorists’ supply lines coming from al-Latamneh and Kafr Zeta towards Helfaya town, which resulted in destroying many vehicles, the correspondent went on to say, adding that the army’s operations expanded control in the northern countryside, securing the town of Qamhana with several defensive lines, and closing in on terrorists located in Helfaya.

SANA’s reporter in the province said that army units, in cooperation with the supporting forces, targeted ISIS terrorists’ gatherings and fortified points in al-Matar al-Qadim neighborhood, killing 15 terrorists and destroying a 150-meters-long tunnel that was used by the terrorists to transport and store weapons and ammunition.

Army units targeted terrorist groups’ movements and fortified positions with concentrated strikes in the northern countryside of Lattakia province, inflicting heavy losses upon them in personnel and weaponry.

A military source told SANA that army units targeted with heavy strikes positions and movements for Jabhat al-Nusra terrorists in the surroundings of Kabani, Zahret al-Deghleh, Fulla, al-Yamdiya, al-Hamboushiye, and al-Tufahiye in the northern countryside of Lattakia, which resulted in killing most members of a terrorist group and injuring others, in addition to destroying three machinegun nests and six vehicles equipped with heavy machineguns.