Syria determined to carry out its obligations towards OPCW, rejects forging facts 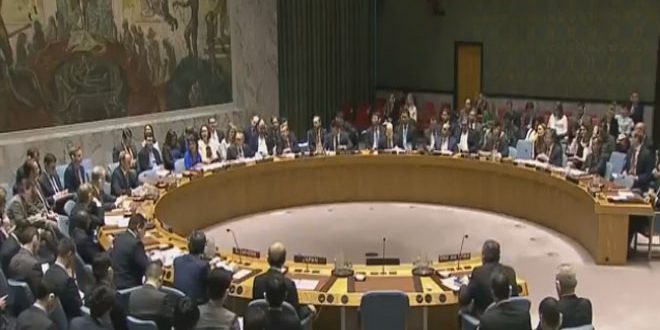 New York, SANA- Acting charge d’Affairs of Syria’s permanent delegation to the UN Munzer Munzer affirmed that Syria is determined to carry out all its obligations it has committed to when it joined the Chemical Weapons’ Convention (OPCW) and it totally rejects fabricating accusations or forging the facts.

He added that Syria stance is principled and firm which rejects and condemns the crime of using chemical weapons or any form of WMD by any side, at any time or place and under any circumstance, considering it as a crime against humanity, unjustified and immoral issue.

“Launching politicized and fabricated accusations against Syria and its allies in the war against terrorism affirms that some sides in this Council, including Turkey and other countries that support terrorism will go ahead in their dangerous practices which seek to defame Syria and blackmail its government, obstruct talks of Astana and Geneva as well as destroy aspects of reaching a political solution to the crisis in the country,” Munzer said.

He wondered about the first beneficiary side of using chemical, poisonous materials against safe civilians, affirming that the answer is clear as the first beneficiary side are those regimes that have targeted Syria since more than 6 years until now, those countries which try to rescue the armed terrorist groups and the allied opposition sides to escape from the political process of Geneva and Astana.

“Syria, while totally rejects forging the facts or fabricating accusations, it asserts its determination to carry out its obligations it has committed to when it joined the Chemical Weapons’ Convention and to the war against terrorism which didn’t stop under any impact of any political or media blackmail.

rejects forging facts Syria determined to carry out its obligations towards OPCW 2017-04-05
m.eyon
Share
Previous Al-Moallem, Lavrov reject the politicized campaign against Syria on chemical weapons’ allegations
Next Terrorist attack with a mortar shell causes a material damage to one of the offices at Damascus University