Al-Jaafari: We are very keen on the success of Astana track 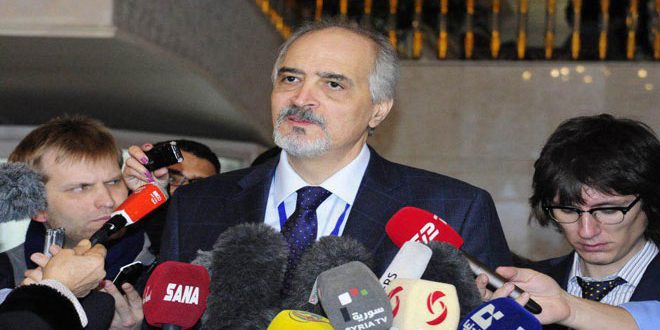 Astana, SANA- Head of the Syrian delegation to the 3rd round of Astana talks Bashar al-Jaafari stressed keenness on the success of Astana track, and on that the talks will reach the safe side in a way that would serve Syria’s higher national interests whether the armed factions participated in the talks or not.

In a press conference on the sidelines of Astana talks on Tuesday, al-Jaafari added “We held talks with the Russian delegation on the agenda of 3rd Astana and we discussed the political situation in a comprehensive way.”

He indicated that the topic of separating the opposition from the terrorists will be on the top of the issues that will be discussed in the 3rd Astana, saying “We didn’t discuss with Russia the signing of any document in Astana,”

He clarified that the issue of attending the talks by the armed factions isn’t their choice, but it depends on the decision of those who support them, saying “that is why the issue is political and is related to the three guarantors and when one of the three guarantors breaks their commitment – and I mean Turkey – this means that Turkey must be one that is asked about the non-attendance or participation of these armed groups.”

Later, in a statement after meeting the Russian delegation to the Astana talks, al-Jaafari said that the Syrian Arab Republic delegation discussed with the Russian delegation all the preparations to ensure its success in order to guarantee that it will produce positive results that match the huge effort put in by Russia, Iran, and the Syrian government, asserting that the Syrian Arab Republic delegation is working in a positive manner to ensure the success of the third round of Astana meetings.

“The Turkish side is hindering the success of Astana, and we are aware that the armed groups’ refusal to come works in that direction and is of course upon the instruction of their Turkish operator. Despite that, political work entails much responsibility, therefore we are involved in a positive manner with the Russian and Iranian sides and will continue unofficial talks tomorrow,” he said, adding that work is proceeding at an intensive rate.

In the same context, al-Jaafari added that the delegation held a meeting with the Iranian delegation where talks dealt with all issues related to the preparations to make the 3rd round of Astana talks a success.

“We exchanged opinions with the Iranian delegation like those held with the Russian delegation as both represent two guarantor and ally countries to the Syrian Arab republic, and it is very necessary to exchange opinions to have a joint ground and evaluation in Astana… and there is a common reading by the three delegations that will push Astana track forwards,” al-Jaafari said following the meeting.

Earlier, the spokesperson of the “armed factions” Osama Abu Zaid said on Monday that the “factions decided not to participate in the 3rd Astana meeting,” under the pretext of not implementing the cessation of hostilities agreement.

The 3rd round of Astana talks on the crisis in Syria started in the Kazakh capital of Astana on Tuesday.