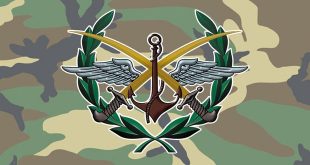 Hama, SANA – An Army and Armed Forces unit, in cooperation with locals, set up an ambush which resulted in seizing a truck with Turkish papers and license plates that was transporting weapons and ammo to ISIS terrorists in the northern countryside of Hama province.

SANA’s correspondent in Hama said that based on information provided by locals, an army unit set up an ambush 1 kilometer into areas where ISIS terrorists are located in Wadi al-Azib area in the direction of al-Sabboura in the province’s northern countryside, which resulted in seizing an Isuzu truck.

The truck, which had Turkish papers and license plates, contained 5,516 rounds for 23mm anti-air guns, 111,780 PKC machinegun rounds, and a number of RPG launchers.