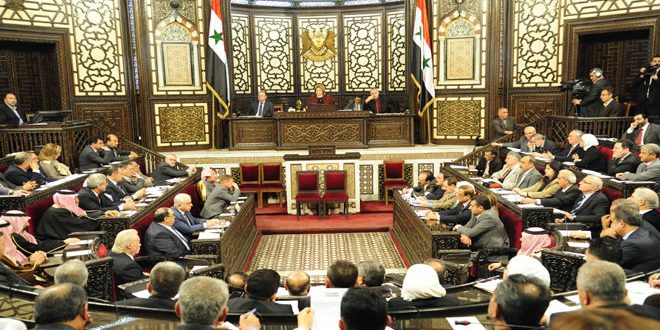 Damascus, SANA – The People’s Assembly saluted in its session on Sunday the Syrian Arab Army over the victory of liberating Tadmur (Palmyra) city from ISIS terrorists and over its continued efforts in defense of the sovereignty, dignity and history of Syria.

“We, together with the heroes of the Syrian Arab Army, are drawing the road of victory against terrorism to build the future of Syria,” Speaker of the Assembly Hadiyeh Abbass said in a statement.

In another context, Botros Morjana, Head of the Arab and Foreign Affairs Committee at the People’s Assembly, expressed in a statement the Committee’s appreciation of the statement issued by the Committee of the Arab Affairs of the Egyptian parliament in which it called for the return of Syria to the Arab League.

“Due to this national position that reflects the real Egyptian role, we suggest to take this opportunity to strengthen cooperation between the two parliaments towards the establishment of an integrated and real Arab front in the face of the challenges, particularly terrorism, in confirmation of the joint Arab action that can’t be achieved without Egypt and Syria,” the Committee added.

The Assembly also discussed the performance of the Agriculture and Agrarian Reform Ministry and issues related to its work.

The MPs called on the Ministry to improve the agricultural reality and to respond more to the needs of farmers, offer loans and provide fuel for them, stressing the importance of working for the restoration of livestock and increasing the cultivated areas to secure the abundance of agricultural products for the citizens.