During the meeting, Hassan underlined the role of communities abroad in supporting their homeland in the face of the conspiracy targeting them, lauding Syrian expatriates’ participation in the presidential elections which astonished the world.

He said that President Bashar al-Assad won the elections because of Syrians’ consensus on fighting terrorism and eradicating it and rebuilding the country, adding that Syria’s steadfastness caused shifts in the positions of some Arab and regional countries which will affect the region.

For his part, head of the delegation Ihsan Barakeh said that the success of the elections was a severe blow to the west which claims to uphold democracy, asserting that Syrians abroad are ready to help rebuild Syria and do all they can for the sake of its interests.

The delegation also met Grand Mufti of the Republic Ahmad Badreddin Hassoun, who underlined the role of expatriates in teaching their children to love their homeland and adhere to its cultural and humane values and in informing them of what is actually happened in Syria. 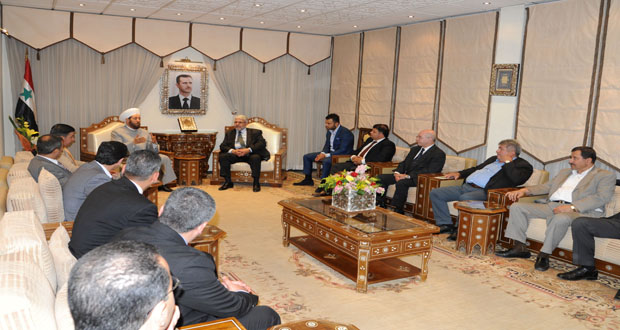 Hassoun stressed the need to bring to light the truth about what is happening in Syria in light of the vicious onslaught of biased media targeting the country and its standards.

For their part, the delegation members voiced readiness to defend Syria and relay the truth about what is happening in it to their countries of residence.