Capitals, SANA, Syrian students and community members in Russia turned out to their Embassy in Moscow to celebrate President Bashar al-Assad’s victory in the presidential elections, which witnessed a huge turnout inside and outside the country. 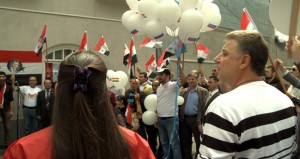 The participants said that President al-Assad is a symbol of Syria’s unity and sovereignty, hailing the role of the Syrian Arab Army in confronting the terrorism to which the country is exposed. 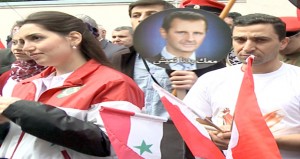 Syrian Ambassador to Russia Riyad Haddad said that every Syrian has the right to be proud of his country, pointing out that victory was achieved by Syria’s army, citizens and the leadership of President Bashar al-Assad. 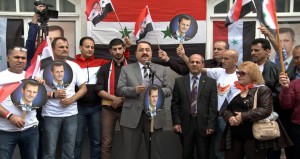 Haddad thanked the Russian friends for their support throughout the years of the crisis, particularly their vetoes at the Security Council which prevented any foreign intervention in Syria.

He also thanked Iran and the resistance axis for their support in preserving Syria’s sovereignty. In the same context, Syrian students in Australia organized a celebration to express happiness for president al-Assad’s winning at the elections.

The participants said that President Bashar al-Assad winning in the elections reflects the will of the Syrian citizens, adding that acts of the armed terrorist groups will not affect the Syrians’ determination.

Syrian students and community members in Slovakia celebrated President Bashar al-Assad’s victory as well, with the participants affirming that elections in Syria were a model of democracy and a successful pluralism experience in the country. 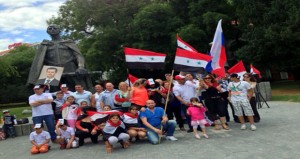 They added that terrorism will not affect or change their position towards their country, pointing out that they will continue work to rebuild what was sabotaged by the armed terrorist groups.

The participants appreciated the Syrian Army’s sacrifices in defending Syria against the global war to which it is exposed, condemning the double standards of the US and the west which support terrorists with weapons and money.

Syrian students and community members in Egypt celebrated the victories achieved by the Syrian Arab Army in confronting terrorism and the winning of President al-Assad. 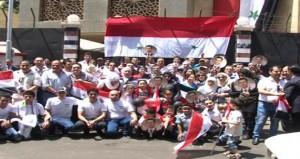 The participants expressed their full support to President al-Assad in the next stage, rejecting any foreign intervention in Syria.

In Serbia, Syrian students and community members held a similar celebration with the participants raising pictures of President al-Assad and placards expressing their appreciation of the Syrian Army’s sacrifices in confronting terrorists.

Syrian students and community members in Iran also organized a celebration to express their joy for President al-Assad’s victory.

The participants chanted slogans expressing their full support to President al-Assad, condemning the policy of the western countries which are supporting terrorism in Syria.

Syrian community members and students in Cyprus also gathered to celebrate the winning of President al-Assad.

They hailed the role of the Syrian Army in confronting the global war to which the country is exposed.