Damascus, SANA- With the aim of supporting the affected families due to the terrorist war on Syria and empowering them economically, the Child Right Association launched the second phase of “Give me Your Hand to Help You” project.

The project targets a number of youths aged between 18 and 40 to train them in vocational workshops in Kafr Batna area in Damascus countryside and it is held in partnership with the United Nations Development Program (UNDP).

The number of people registered to benefit from the project reached 900 young men and women, according to the project director Khawla Al-Khatib.

In a statement to SANA, al-Kahtib indicated that applicants are selected according to specific criteria related to the number of children of the family and the educational aspect of the applicant. 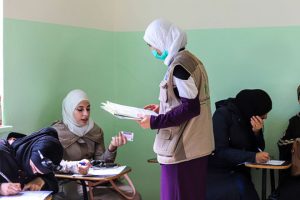 She added that the priority is given to the families affected by the terrorist war on Syria, persons with disabilities who are able to work, women who are the breadwinners for their families and to people with less education in addition to the families that include a large number of children.

Al-Khatib asserted that empowering some families economically has a significant role in supporting the child and ensuring his/her right to learning, health and safety, in addition to its role in curbing some negative social phenomenon such as the school dropout.

She clarified that the training period for the beneficiaries of the project is up to four months and it will be within workshops in the areas of “Kafr Batna, Hazza, Hammuriyya, Ain Tarma, Jisreen and Saqba”.

The trainee, according to al-Khahtib, is given financial compensation to take care of his/her family during the training period.

Al-Khatib pointed out that the professions that are being trained are chosen according to the desires of the registrants and according to the market need, as the 700 professional workshops that could participate in the training were surveyed.

This type of project will facilitate the trainees’ access to the labor market, whether within the workshop in which they were trained or in other places, she concluded.

The first phase of the project started last year, and the number of beneficiaries reached 79 youths who were trained in the professions of “carpentry, metal working, maintenance of electrical devices, shaving and sewing”.

The trainees were provided with training bags according to the profession they were trained in.