Damascus, SANA- Majd al-Zaqout , a 15-year- old boy won the bronze prize for “Golden Harvest” picture about the Syrian heritage during wheat harvest at the 27th Annual World Children’s Picture Contest, which was organized by IE-NO-HIKARI Association , in cooperation with the Japanese national agricultural cooperative organization . 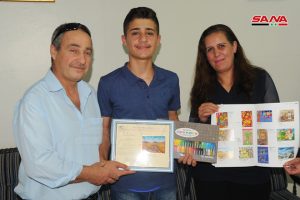 300 children from over different countries of the world, among them 27 Syrians, participated in the competition.

Speaking to SANA reporter, al-Zaqout said that the picture showed the beauty of Syrian intangible heritage during the season of wheat harvest as the gold colors in the picture expressing joy and goodness and blessing.

Majd added that the prize gave him an encouraging impetus towards to develop his talent in order to participate in various internationals competitions, offering his success to Syrian children who defied all the difficult circumstances during the years of the terrorist war on Syria and continued educations, developed their talents and participated in all scientific and cultural competitions and events.

Al-Zaqout received the prize on Tuesday through al-Baath Vanguards Organization –Damascus branch after it was sent by the Syrian Embassy in Tokyo.