Provinces, SANA – Civil Defense personnel, in cooperation with the authorities and locals, extinguished a large fire that burned down large areas filled with dry grass at the Jordanian-Syrian borders, which had damaged barely fields in Sweida’s southwestern countryside. 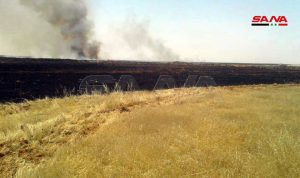 The fire had started in Jordan and extended into Syrian territory, with the wind causing the blaze to expand and reach agricultural fields before it was put out.

In al-Safawi village south of Salamiya in Hama province, firefighters and locals extinguished a large fire which started in an area of 11 hectares where cumin, olive, and pistachio are cultivated.

Director of the local Agriculture Directorate Rajab Salameh attributed the fires to both negligence and deliberate arson caused by the Turkish occupation and its mercenaries.

In Daraa province, fires during this season have damaged 6 hectares of wheat and barley in various parts of the province.